This is one of those times where the nickel-and-diming of DLC and “retailor exclusive” content has become a big headache. The problem is not only figuring out which editon to buy and where, but, if you really want certain items, if you should buy multiples.  It’s almost inevitable that any retailer exlusive content (whether bound by store or country of purchase) will at some point be purchasable via PSN, XBOX Live or PC service of choice. However to “complete” your collection it will probably cost you a pretty penny. Here are some of the basic pre-order bonuses.

For those willing to invest $99.99 the [amazon_link id=”B003O6ECW4″ target=”_blank” ]Batman Arkham City Collector’s Edition[/amazon_link] will not disappoint. The crowning jewel of this collection, for me, is not the beautiful statue, the extra maps or the included Gotham Knight DVD.  It is the kick-ass Dark Knight returns skins 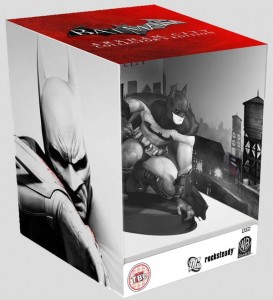 modeled after one of, if not the best, story-line in Batman Comics history.

To gear up for Arkham City, I’ll be working towards a platinum trophy. I finally pull of the Freeflow Perfection last night.  Most of the trophy clean-up will be going towards completing the game on hard difficulty and routing out the final Riddler quests.