Back again, and late again here is the recap for the October 30th episode of Boardwalk Empire, following Episode 5, Gimcrack and Bunkum. This one is sorta? brief.

The Age of Reason Recap (S2E6)

Van Alden reads his bible, while Lucy requests groceries. Margaret and her boy see the priest with Nucky there.  Prepping for 1st confession. Margaret will have to confess as well. Nucky’s case goes federal, while he gets his shoes shined. Reemus calls over his deal with Smith of the Attorney General’s office.  “Reemus” talks about himself in the third person and he’s an ass.

Jimmy receives advice from his father’s associate. Who praises Nucky. Lucy’s water breaks and she is of course, alone. Margaret talks to Katy the maid about Slater, she lectures her on her “behavior” yet she sleeps with “uncle” Nucky I cant figure Margaret out this year.

Van Alden is at the hospital checking on his burnt agent Clarkson. Ouch. He lectures his boss about blasphemy at the hospital. Clarkson awakens,  he “sees” agent Van Alden, he “knows what he did”. Van Alden break-down, what happens now?

Rothstein, Waxey and Nucky meet about the Philadelphia booze shipment. Lucy is suffering at the apartment. Jimmy and Ang walk the boardwalk with “wireless” record players. Jimmy sees Waxey and Nucky.

Van Alden calls his wife. about Clarkson. He begins to confess everything because he “loves her”… oh he’s gone off the deep end now. Margaret and Nucky and making sweet sweet love, but Margaret is somewhere else.Then she accuses Nucky of being elsewhere. She is

nervous about confession. Nucky is concerned about her honesty in the confessional.

Jimmy gets a call from Manny Horowitz. Jimmy thinks Manny is in on the deal, because Herman was with Waxey and Nucky. Manny’s right hand man. Manny didnt know. Trouble for Chaim…

Owen arrives and chats with Margaret. Margaret gets the tinglies around Mr Slater.  Lucy is still alone, the Pale Rider, Van Alden cannot be far behind. Lucy begins to deliver alone. Senator Edge calls on Attorney General Shooter McGavin. Edge of course has history with Nucky. Blackmail over the Veterans Bureau which is mostly a scam, trouble for Nucky.

Horrowitz is chopping up Chaim (Herman). Waxet paid him to spy on Manny. He spills the beans on McCoys shipment for Nucky to Philly. Manny has Jimmy end Herman. Like the Spiderman kiss scene only with a serrated blade.

Margaret heads to confession. Margaret knows Nucky is “bad, but she is “drawn to him”…. wait a minute, she’s talking about Owen. Yeah, I win again!  Attorney General Harry, withdraws support due to pressure from Senator Edge. Lucy gives birth. Clarkson keeps 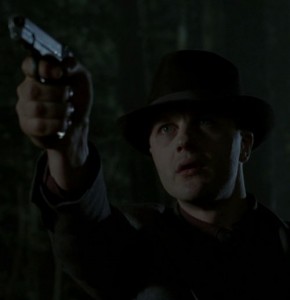 repeating what he said to Van Alden. He realizes it’s a childhood memory and changes his mind about confession… lame. He returns home to Lucy and the baby with lemons. Van Alden is touched to see his child.

Nucky’s shipment is attacked by Harrow and Jimmy’s crew. Charley recognizes Jimmy’s voice. Lucky Luciano calls out. Jimmy says he won’t shoot. Jimmy and Lucky are spinning a deal, Horowitz included. They let the shipment go, then talk the future.

Van Alden brings the doc. His wife is there, she cleaned up and is taking care of the Lucy. Wow. The child is “for her”.