So our show starts with a healthy recap of the previous seasons deeds (and misdeeds), all

gearing up towards the deck being stacked against Nucky. We then roll into a montage of good times throughout Atlantic City. Booze and cash are rolling in and Nucky is in the center, carousing with the women, all while poor Ms. Margaret Schroeder waits at home sitting on the edge of an empty bed. We also get a glimpse of FBI agent McCreepy and his wife. Seems Church Lady is in town for a weekend visit. What could go wrong with his pregnant mistress here too?

We cut to Chalky’s warehouse in the woods where the bootlegging is taking place. A knock on the door is answered to show a man with his throat opened and the Klan with an old school military gatling gun on the back of truck. They open fire, and it’s a massacre. Chalky is stunned and is about expire, before a woman bursts from a back room, wounding an assailant and getting shot herself. Chalky takes aim on the retreating Klan members with a rifle, shooting one in the throat.

Traitor Jimmy is unpacking things in his new home with both his wife and make-out mom. Oh boy does make-out mom create more awkwardness by revealing an old ritual from Jimmy’s baby days. Such a creepy relationship. Nucky finally strolls in the door at nearly 8 am, to Margaret’s Chagrin, and quickly makes his exit to get away from the tempramental children. So much for the family life, eh Nuck? Meanwhile, Van Alden takes Church Lady wife to see the precint and Capone, still working for Torino, has a meeting with a man named Reemis. Seems that Reemis will now be supplying a large portion of Chicago’s booze out of Cinncinati. Capone is supposed to bring the news to Atlantic City and Nucky. That should be interesting when it happens.

Nucky, the mayor, various cohorts and new entry Irishman Ernie, a gravel supplier, cement their relationship on a scheme to buy cheap land, improve it with roads and then sell it back to the state at a premium. Nuck pockets the dough and then is forced to deal with the reports of a Klansmen being shot. Visiting Chalky with Eli in tow, Chalky lays it down straight. Nucky could easily lose the black support if the Klan isn’t reigned in, something that Eli should have already done. Nucky speaks out against the Klan at a black church and then speaks out against the blacks at a white church, a nice transition of back-to-back scenes there. When the wounded Klansmen dies, Chalky is arrested, “for his own protection.”

We knew that Jimmy had begun to try and take power last season and that Eli felt alienated. Well, now it seems that the healthy commodore ordered the hit on Chalky’s warehouse and not only is Jimmy aware, but Eli is as well. While that’s happening, Agent Preacher takes the wife to a fine dinner which turns into a raid. Seems Mrs. Van Alden is turned on by the violence of the affair and they later proceed to have relations. Wouldn’t it be great if she finally gets pregnant now that her husband has knocked up a pro, excuse me, Nucky’s gold-digging ex-dancer girlfriend.?

Later, Nucky and Jimmy talk about old times. Nucky was essentially Jimmy’s father, later in the episodes stating that he was “father and mother” to that kid. If the character of Jimmy is supposed to be selling that he is conflicted, I’m not buying it for a second. Nucky essentially let Jimmy know that he thinks something is up and gave him the opportunity to come clean. Later, Margaret urges Nucky to play the father role for her son. Just when you think he’s going to, he buys off the kid with candy money… lame, Nucky!

Jimmy and Harrow (yay! Harrow kicks ass!) are at the trashed 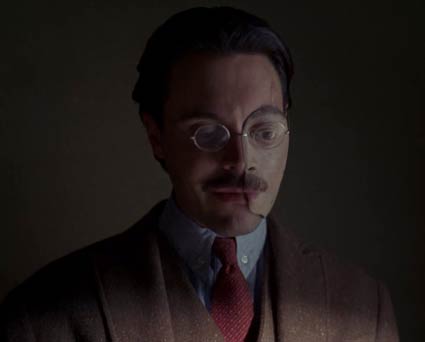 warehouse and take the booze to the jerks supporting the Rothsteins. Full-on betrayal is in full-on effect! Two later scenes with Harrow show how envious he is of Jimmy and his “normal life”, essentially pushing the point to Jimmy that he has a good thing going… why would he want to mess everything up by trying for more. I could see Harrow turning on Jimmy under the right circumstances.

We end with three entertwining parts: Nucky being arrested by the states attorney for election fraud, Jimmy callously shoving a touching gift from Nucky into a closet and Agent Van Alden admonishing his new roomate, Nucky’s ex-girlfriend Lucy, whom he has empregnated, to “stay in her own room”. A lot happening for an opening episode, Though it felt a little underwhelming, it was still pretty good.