So we left off last week with Dexter doubting Brother Sam as a killer, Deb destroying her relationship with Quinn and becoming his boss and the rest of the departments as well. Also, the creepy cult with Edward James Olmos as the “Christ-figure” made another kill.

Smokey and the Bandit

Deb is already stressing herself out to start the show, worrying about what to wear. She banters with Dex. Meanwhile at the abandoned church we find that the jogger was not a 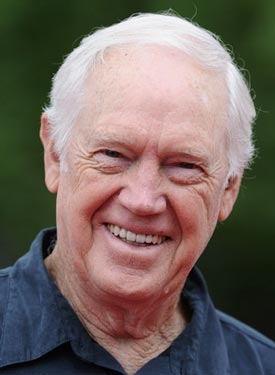 kill, but an abduction. He is chained to the floor and will not “be released” until he repents. The EJO character is painting mannequin parts and “waiting for the right time”.

We head to a crime scene where Batista spots a Smokey and the Bandit car, that he’s wanted since he was a child. The scene has a dead hooker and it appears that someone tried to pull out her tooth. This reminds Dex of a serial killer icon from his childhood, the Tooth Fairy, who murdered women and stole one of their teeth in the Northwest during his childhood.  Quinn shows up at the scene with a chick and is obviously trying to get back at Deb, trying to turn Batista against her as well.  Batista sticks with Deb, giving her advice for dealing with LaGuerta later in the show.

Dexter researches the Tooth Fairy and surmises he would be a man in his seventies and tracks one Walter Kenny from Grants Pass, Oregon.  This is played actor Ronny Cox who has appeared in many television shows and movies. I instantly recognized him as the captain from Beverly Hills Cop. Dex gets his car back from Brother Sam, who invites him to the baptism of the young man whom he helped to save from thugs in the previous episode.

Masuka continues, in bad judgement of course, to flirt with his hot intern.  He shows her evidence from the Ice Truck Killer case and she is very interested. She later agrees to go on a date with Vince, but does she really have any interest or is it just so she can steal some evidence from the aforementioned case, which she does.  She seems to have a serial killer fetish. I wonder if

this will possibly carry over to Dex?

Deb leads her first briefing and is doing well until Quinn tries to mess with her. LaGuerta backs Quinn, Batista backs Deb. Later Deb has a conversation with Quinn whom seems to be mellowing… nope wait… he’s an asshole! Yeah, I can hate Quinn again! Dex gives Quinn the cold stare during the briefing, this may reignite their spotty history.

Dex eventually confirms Walter Kenney as the Tooth Fairy and proceeds to get “close” to him. Its a pretty funny dynamic of an old serial killer turned cantankerous old man. Dex laments Kenny as possible fate for himself, alone with nothing as the last days of his life come in old age. Kenney figures out that Dex knows who he is and tricks him into the car at gunpoint, but Dex crashes his car (again!) to avoid the danger.  Dex takes the tooth fairy out, smothering him (a natural death) in order to not continue his legacy. One more bad guy down.

Later the jogger begs for forgiveness and to be “purified”, EJO says he’s ready. What does that mean? Apparently that means parading four horses with the painted mannequins parts riding them through crowded city streets.  Except one of the mannequins now wears the poor joggers head.  This is Four Horsemen of the Apocalypse style and the killer/s are dubbed the Doomsday Killer. At the end of the show Batista rides away Smokey and the Bandit style.