When we last left Dexter he had successfully guided Lumen through her quest for vengeance, setting her free and agreeing to take on her Dark Passenger. Dexter is focused on his children, Harrison specifically.  The opening flashback is focused on Dexter’s inability to change himself into “something normal” and the fact that he cannot get close to anyone without consequence (though Lumen could be considered exception). Short recap: Dexter and Hammer Time.  Long recap, below.

Episode One – Those Kind of Things

We start with a fake-out.  Dexter is bleeding from the stomach and holding a bloody knife.  It’s just a trap to lure in some ambulance first responders who have been letting people die

in order to harvest and sell their organs. Three minutes into the actual show and we already have two kills.  Looks like it’s back to business for Dex.

Dex has purchased the next door condo/apartment and has also hired Angel’s cute sister to watch Harrison (the other kids are nowhere in sight for the whole episode). Dex is stressing about a “preschool” interview at a school Batista has recommended.  Batista has a overprotective father thing going on with his sister and she may have interest in Dex.  She is covering for Dex’s late night tomorrow for his High School Reunion. Dexter and Debra has discussion about beliefs and feeling and how the hell doesn’t she realize he’s a sociopath.

Quinn’s acting weird, it’s obvious that he’s wanting to propose to Deb, which is confirmed later on when he meets Deb at a bar.  Of course before he can pop the question it turns into a shootout.  Wonder where they go with this storyline. LaGuerta seems cozy with the chief, that’s because she’s blackmailing him into the Captaincy.  Apparently she has already divorced Batista, but will be giving him her old job.  Weird.

Masuka is a “professor” looking to get an intern on at Miami Metro.  A very cute 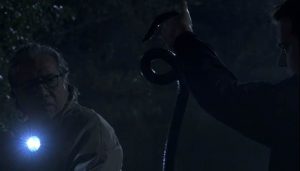 intern eyes Batista, but she isn’t chosen for the position…. until Masuka’s choice  passes out at the eels crawling out of the dead-body crime scene.  Oh btw, the eels in the stomach, that comes from Adrimal Adama, aka EJO, aka Edward James Olmos and Hanx’s kid (Colin Hanks) and their weird biblical cult of two.

Dex’s reunion is smokescreen for sacking the QB, the big jock who probably murdered his wife, a woman who was kind to Dex in high school.  Only problem is Dex is popular now. He’s got a high-profile job, his wife has died and as Ghost Dad says, he’s one of the only ones that,  “looks better than he did in high school”. Dexter’s fame and fortune make it difficult to carry out his mission, but it does earn him some “favors” from the prom queen who used his work to cheat her way through high school. “Stop talking Dexter”. Three kills, one episode and host of story-lines already emerging.  Good start to the season.

Things to watch for the coming weeks: