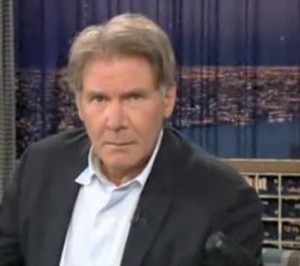 were unable to find… well, that’s because there is no episode to night. Apparently Conan has adopted the same strategy that they use for Lopez which is Monday through Thursday no Fridays. I’m not sure if this is a good or bad thing yet. Fridays in people’s minds are reserved for going out and doing things, if that is the understanding, it make sense to not have a show that people aren’t going to watch. On the other hand, The big network rivals have their Friday shows, and Conan is not competing with them. Anyone tuning into Conan may find themselves switching over to a different host and there’s going to be a small percentage that stay.

Let’s Have a look at the guests coming up for next weeks, show.

Looks like another good week. I’m particularly looking forward to Harrison Ford. He is always a good interview for Conan (see Harrison Ford: Secrets). People don’t realize that Ford is a very shy person who has actually struggled with public speaking for a big portion of his life. Conan is one of the few people to consistently get good stuff from Indy. Check out the clip below where Conan and Harrison talk about his “grumpy” persona and flashback to Star Wars Christmas.

First week of Conan was solid, a little bit of feeling things out again, but I think we (Conan fans) got what we wanted out of his return. Be back next week with new episode recaps, look for The Walking Dead, Boardwalk Empire and Dexter in the early part of next week as well.