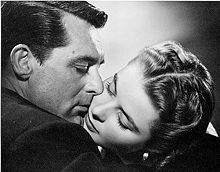 Notorious is 65 years old this year (2011) and stands out to many individuals as one of Alfred Hitchock’s finest films. It intertwines multiples genre, the spy/espionage thriller and the film noir, while at the same time being the most overtly romantic of his films. In fact, though actually an extended scene of multiple kisses, in order to skirt the “Hollywood Code”, a famous scene with stars Ingrid Bergman and Cary Grant has the couple breaking the rule of three seconds with nearly two and half minutes of breathtaking closeness. It is one of the most iconic scenes of Hitchcock’s career, which is saying quite a lot. Get a glimpse of the scene at the 15 second mark of the trailer.

The argument that has occurred amongst cinephiles and genre enthusiasts for decades is the inclusion of Notorious on the lists of classic Film Noir. I would argue that this film, written by celebrated American screenwriter Ben Hecht and originally put into production by acclaimed producer David O. Selznick, firmly falls into the Noir category. There have been numerous Notorious film reviews over the decades and many have included discussions solely on this topic. I am not a film historian; I can only speak with my knowledge as an avid film-goer and appreciator of the Noir style and genre.

Noirs are often associated with crime pictures and detective work. In Notorious we have crimes against the state perpetrated by Nazis operating in Rio de Janeiro. The wonderful Claud Rains, as Alex Sebastian, who most will remember as Captain Renault in Casablanca,

is a member of this secret Nazi group whom T.R. Devlin (Cary Grant) and an American government agency are seeking to infiltrate. You have mystery and crime, although simplified forms of the Noir genre, right there. What we also have is a further establishment of the Spy/Espionage film, which Hitchcock helped to form in the 1930s.

Ingrid Bergman’s Alicia Huberman is our femme fatale of sorts, though she doesn’t fit perfectly within the archetype of the role. Huberman is “Notorious”, a troubled woman, who drinks too much, has a string of lovers and severe family issues, with a father convicted of treason for collaborating with the Nazis.

Perhaps the most interesting treatment of the Film Noir genre in Notorious is the standard use of low-key lighting and balance and the cruel, ambivalent nature of the characters as related to what is happening to them.  Lighting in the film is appropriately moody for key interactions with characters, yet bright and vivid at times in outdoor and party sequences.  Similarly Devlin and Alicia take turns treating each other extremely poorly. They find just the right things to say to cut the other down, all while hiding their increasing feelings for each other, almost to Huberman’s demise.  Seems to me you have the qualities of a) A Film Noir B) A Spy/Espionage Thriller and C)A Hitchcock Masterpiece.

A lot of people point to Vertigo as Hitchcock’s best in terms of scene composition and tone.  Notorious can’t be far behind with some of the best shots of any of his films bar none.  There are two things that he focused on when filming his movies.  One being that the camera can actually become a character in the film itself, which he talked about extensively and mentioned when discussing the aforementioned “Long Kiss” sequence.  The second idea was that the camera should show precisely what needs to be seen; each shot was to be a 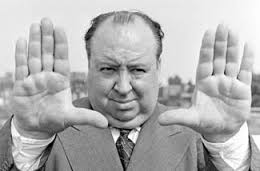 statement made by the camera and each move explicit in its direction.

The two best examples of this in the film are the ballroom sequence and the discovery of Alicia as a government agent.  The ballroom sequence begins on the second floor of Alex’s (Rains) home and sweeps outward and down, slowly working it’s way tensely to the key hidden in Alicia’s palm which will unlock the work cellar where she and Devlin will uncover part of the Nazi plans.  The item is carefully placed in her hand and there is so much going on in that ballroom, yet her focus, and thus the camera (and ours) is with that important plot device, the key, which moves the picture forward.

Later after Rain’s character and his mother have discovered that Alicia is an “American agent” they plot to poison her.  In one frightful moment after slowly succumbing to the effects of the poison, Alicia realizes her dire situation and we with her take turns zooming in on the faces of Alex and his mother.  We know, that they know about us.  We also know they are aware we have figured it out, but are helpless to do anything about it.

Notorious competes with Rear Window for my favorite all time Hitchcock film. It cemented the star status of Ingrid Bergman, and supplied wonderful, subtle performances from both Cary Grant and Claude Rains.  It is one of the L.A. Noire Gold Film Reels hidden throughout the game and the first review of the L.A. Noire Golden Film Reel Reviews Project.