**** Update – Check out the review on The Girl with the Dragon Tattoo sequel, the Girl who Played with Fire now! ****

Two quick reviews for you guys of The Warlords and Girl with the Dragon Tattoo on Bluray. Also, I just received the God of War Collection from Gamefly. People are always surprised, but I never quite got into God of War. I made it 3/4 through the 1st one but never finished due to lack of gaming time and interest. I never played the sequel. Recently playing through Darksiders got me into that style of game again, and upgrade graphics and trophies mean I will probably play-through both now. 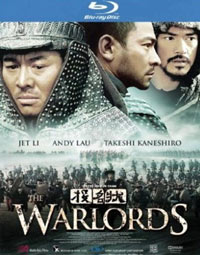 I originally had The Warlords in my queue at the same time as Red Cliff (the full 2-movie version).  That was a little too much war and Chinese history for the same week so I staggered them slightly.  While featuring several of the same actors, Andy Lau and Takeshi Kaneshiro The Warlords is a different film than the Red Cliff series.  While Red Cliff was a more poetic and showcased a vibrant palette, The Warlords has a decidedly muted tone and make strong use of grain to achieve it’s mood.  The combat depicted in the films are also highly contrasted.  Red Cliff made use of that palette and extended the artistic nature of the film into combat, with Dynasty-Warriors (video-game) style battles featuring wire-work and outrageous movement.  The Warlords is more visceral and up-close; with some fairly gory moments.

Lau and Kaneshiro are always good, and this film is no different.  I love when Jet Li actually gets to act in a film and be more than a martial arts figure-head, and he gets some meaty scenes here.  He can have a very expressive face at times and uses that to full effect in this film.  Check out The Warlords on Blu-ray, a nice historical-based drama and action film.

The Girl with the Dragon Tattoo

I missed the recent Oregon theatrical run of this, and was excited to get it in the mail over 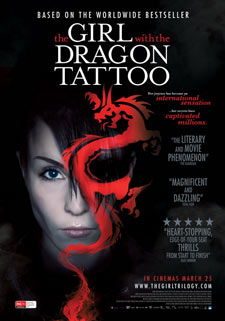 the weekend.  I have never read the books, but hope to do so after seeing the first film. My understanding is that will be two more in-line with the books.  The core of the movie is a 40 year old murder mystery within a prominent Swedish business family.  The real heart however are in the complicated main characters of Michael Blomkvist and Lisbeth Salander played by Michael Nyqvist and Noomi Rapace respectively.

Blomkvist is the editor of a magazine recently convicted of libel against a local businessman and sentenced to 6 months of prison time.  He has 3 months before the beginning of his sentence and in that time he is contacted by Henrik Vanger, wonderfully portrayed by Sven-Bertil Taube, the surrogate father of a girl named Harriet Vanger who disappeared 40 years earlier.  Henrik wants Blomkvist to solve the mystery.

Lisbeth Salander is the troubled, “hacker” who researched Blomkvist prior to his hiring and cannot stop herself from continuing to follow his research into the case and becomes involved herself.  Lisbeth has a difficult and complicated life due to some childhood trauma which she carries with her and affects all of her relationships and choices.  The issues of her past come motivate her to a degree help Blomkvist solve the mystery.