I’m trying to decide whether or not Jackass 3-D making $50-million is a sign of the apocalypse, a statement about the movie-going public or a simple representation of inflated ticket prices for 3D films. Most likely it’s a combination of all three. So, grab your kids, your laptop and head to your nearest wireless capable fall-out shelter, and have a looksie at my thoughts on the film that came in second to Jackass with a respectable $22.5-million, Red. 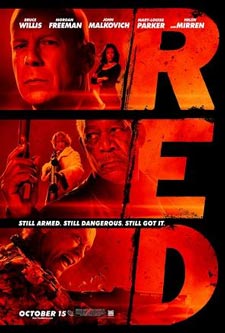 The trailer for Red came out earlier this summer and it was perfect. I often times find myself struggling with preconceived notions go into a film; trying to take the idea of writing film review seriously by going in with an open mind. Most of the time these feelings are due to how horrible the premise of the film is; i.e. how bad I expect it to be. It was the opposite with Red. The concept of people who have aged and are somehow thrust back into their positions is not new at all of course, the concept of them being government black ops probably is however.

Marrying the idea with an impressive ensemble cast featuring, Bruce Willis, Morgan Freeman, Helen Mirren, John Malkovich, Mary-Louise Parker and Karl Urban, created a level of expectation, which has it’s own set of problems. So many films fail to live up to their concepts, or their carefully-crafted trailers for that matter. Would this be the case with Red?

Frank Moses, played by Willis is a retired black-ops man, who now spends most of his time, living a simple life and having phone conversations with Sarah (Mary-Lousie Parker) on the phone under the guise of missing pension checks. In reality, Frank is tearing up the checks just so he can talk to Sarah. His little retirement world is rocked when assassins show up at his home, after dispatching them in fairly 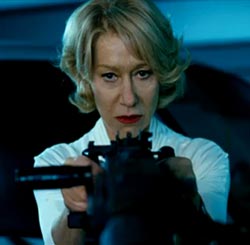 easy fashion, Frank heads to Kansas City to protect Sarah, which may or may not involve kidnapping her.

Frank then contacts old friends, colleagues and rivals, starting with Joe (Morgan Freeman), who is in a nursing home. Joe uses his contacts to get Frank vital info, leading him to meet up with Marvin, played by John Malkovich who steals a number of scenes from the rest of the cast. This is also leads to meeting up with Helen Mirren’s Victoria and Russian Agent Ivan, played by Brian Cox who steals quite a number of scenes himself. All the while the former black-ops squad is dogged by agent Cooper played by Urban, as well as the vice president and a corrupt senator played by Richard Dreyfuss.

Red has a great cast, a good story and I would definitely recommend it for fans of any or all of the actors featured or fans of fun action films. I can’t speak to fans of the graphic novel that this was based, as I haven’t read it myself. There are plenty of amusing moments throughout the film, and the action is paced well for the most part. The movie probably could have shaved 10-15 minutes off of it’s run time, but I don’t really have any complaints. Red is in theaters now.