Scarlet Street is a 1945 Film Noir from Austrian director Fritz Lang. Lang was a master of the dark genre of German Expressionism which lent itself so well to the Noir genre. The British Film Institute titled him as the Master of Darkness. Lang was best known for the still popular films, M and Metropolis. Films like these went on to inspire generations of filmmakers and their influences are still felt today. After emigrating from Germany, possibly under Nazi pressure, he went on to have a successful Hollywood career. Scarlet Street, though receiving mixed critical reaction, can be considered one of those successes.

The Cast of Scarlet Street

Scarlet Street reunited the main cast of Lang’s previous film, The Woman in the Window, 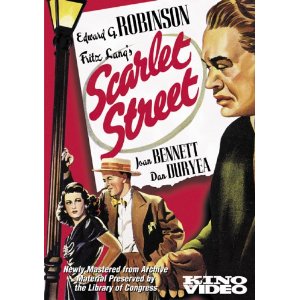 including Edward G. Robinson, Joan Bennett and Dan Duryea. Bennett is best known for roles in these two Lang pictures, though many American audiences will remember her role on Dark Shadows and her turn as the creepy Madame Blanc in the Argento horror cult-classic Susipria. In Scarlet Street, Bennet plays our scheming femme fatale, constantly playing up her love for “Johnny”, Duryea’s character, as an excuse for her poor behavior and deception aimed at the main character Christopher Cross. Cross is played here by Edward G. Robinson. Many people know Robinson primarily for his gangster roles and the voice with which he used playing that character. Some others will known him for The Ten Commandments. I myself only knew the gangster Robinson and was quite surprised by his very simple and reserved, yet complex performance in this film. He was very good.

The Story of the Street

The basic concept  is the older man who falls in love with the attractive younger woman only to be used by her and the psychological impact that has upon its discovery. Christopher “Chris” Cross (Robinson) begins the film at a celebratory dinner in his honor for 25 years of service to his company. When the boss leaves and gets into the a car with a young and 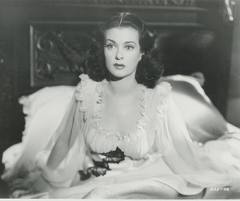 glamorous woman, Chris remarks how it would be wonderful to be “loved by a young woman”. Late after the party is over, he notices a woman being accosted by a man. He runs up and plays the part of the hero, knocking the man down and out with his umbrella. When Chris goes to grab the police the reaction and subsequent dialogue from our damsel in distress, Kitty, tells us that something is amiss. Turns out the bully is none other than her boyfriend Johnny, but Chris doesn’t know that. He picks up the tab for some drinks after walking Kitty home. Chris in his shy manner of conversation and unwillingness to reveal his payroll job for fear of creating disinterest with the girl, lets her believe that he is a successful painter. This lie begins a slow downward spiral of consequences.

Kitty at the urging of Johnny, whom she’ll do anything for, agrees to essentially con poor Chris into giving her some of his non-existent fortune. Chris having fallen head over heals for the girl is eager to impress her, and though reluctant, begins to make increasingly poor decisions to satisfy the “needs” of Kitty and her schemes. Kitty even goes so far as to take credit, though somewhat reluctantly, for Chris’s amateur paintings which become a sensation (perhaps playing on Edward G. Robinson’s real-life love of art). Chris believes that he and Kitty are in love and that Johnny is just a friend. When the truth gets revealed the slow spiral completes its final revolution and Chris reaches rock bottom in dramatic fashion.

In the very end we see portrait of a psychologically broken man. Though it’s clear how Chris got to that point, his final fall came more abruptly then it perhaps should have. We have some foreshadowing of his mental state when he has to deal with his mentally abusive wife, but in “screen time” it doesn’t get us all the way there. With what Kitty does and says to Chris, it doesn’t surprise us all that much when his reaction comes but somehow even her treatment of him seems over-the-top in pushing for an end to the film. Yes she is conniving and deceitful, but we don’t really feel the full vitriol that she unleashes on Chris build during the film. Also it seems as  though we are to feel at least a little sorry for her, but the “my boyfriend made me do it” innocence is removed with her final speech.

Scarlet Street has not been preserved well. A link to a full, legal, streaming version of the film is below. The Scarlet Street DVD version is cleaner and slightly higher resolutions (I’ve been told the Remastered Edition does a little better), but that would be probably be only for Noir enthusiasts and collectors. I took two things away from the film. The first is a beautiful explanation of falling love and painting from Chris, who states that “every painting is a love affair”. The other message received is a simple one about revenge – covered by the a little too long conclusion to the film – no one ever gets away with it. Whether outright caught or dealt their own revengeful repercussions, the dish may be best served cold, but often goes sour.