The brilliant re-imagining of Sherlock Holmes on the BBC this past year, simply titled Sherlock will be making it’s American debut shortly. The Sherlock Blu-ray release seems to have gotten a rapid release due to the huge buzz in it’s native UK, and will be released on November 9th, 2010. It is getting some time on PBS in late October via their Masterpiece (I assume this is the former Masterpiece Theatre) online, and possibly broadcast as well. The first “season” is a three episode arc, with individual mysteries and an overall storyline as well. Each Episode is an expansive 130 minutes long.

Sherlock takes the titular character into the modern age. He retains the traits both positive and negative that make the character so interesting but basically updates the technology and vernacular. I’m not very familiar with Benedict Cumberbatch who takes on the role of Sherlock, but he is quite well known in his home country and is a BAFTA nominee for his work. Cumberbatch has an interesting look and demeanor that seems to perfectly suit the spirit of Sherlock, particularly how they have written his character here. His portrayal is appropriately detached as fa as tact and social graces are concerned, and solely focused on details and the unusual crimes at hand. He is bored by the routine and trivial, which can drive those around him crazy.

A face that I do recognize is that of Martin Freeman as Doctor John Watson. Freeman was 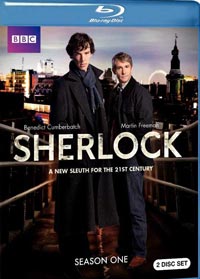 in The Office and Life on Mars, two British shows that made their way across the pond for American remakes, and he was a central character in both of them. Watson in this version is an veteran of Afghanistan, haunted by his experiences there and carrying with him a limp from the conflict, which Sherlock deduces to be psychosomatic upon their first meeting. Watson finds that in order to reduce the stress of the war he really needs experiences more like it, which are supplied by his eventual partnering with Sherlock. Rupert Graves adds to the cast as the sometime opponent, sometime employer of Sherlock, Inspector Lestrade. Throw in some appearances my Sherlock’s brother Mycroft, and the looming specter of a bigger conspiracy afoot masterminded by the evil Moriarty and you have the makings of classic Holmes material.

As mentioned, Sherlock Season One is scheduled for release on November 9th. It features all three episodes in high definition. Details of the extras have yet to be released. In addition to the Sherlock Season One Blu-ray, the show can be seen via the watch online feature on PBS. Sherlock will be broadcast on Masterpiece Mystery! on Sundays, October 24, October 31 and November 7, 2010 and is listed at a 9pm EST start time. This is highly recommended. Think House blended with Sherlock Holmes with a bit of action thrown into the mix. All three episodes are fantastic and deifinetly leave you wanting more; good thing that Season 2 has already been ordered by the BBC.