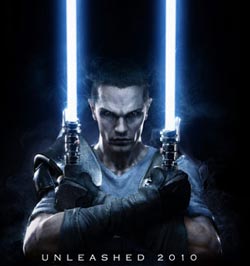 Star Wars the Force Unleashed II isn’t in the budget right now, and I don’t know anyone who has put in the purchase yet, so I can’t comment first-hand on the game. However, I think I end up being glad that this wasn’t the pre-order purchase that I was hoping to have on my list. The collective reviews are not looking good for the game thus far. Typically I don’t form any sort of opinion until I play a game myself as I definitely find at times I disagree with the major gaming review outlets. The consensus seems pretty clear on this one though.

IGN’s Force Unleashed II Review
– Touts the games beautiful graphics and sound design, but slams the game for it’s redundant and extremely short and uninteresting story, giving it only a passable grade.

Kotaku’s Force Unleashed II Review
– Kotaku gives the game kudos for fixing the problems from the first one, particularly in regards to force but lets us know that “a slew of new problems” have been introduced in their stead. They even have bad things to say about the voice acting, which I felt was a strong point in the first game.

Joystiq.com’s Force Unleashed II Review
Joystiq takes the critique one step further and calls it, “a desperate cash grab”. They also point out the improvements on the original’s issues, but absolutely hate the storyline of this sequel.

Gamesradar.com’s Review
More of the same here, though they offer more praise for the things that are done well, even going so far as to state that it is definitively, “a superior game” to the first.

Sounds disappointing to me on the whole, but I will probably check it out in the future, either at bargain bin prices, or as a borrow from some other gamer-soul unfortunate enough to purchase this one.