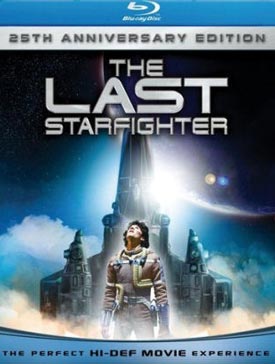 I have heard a lot of people talk about The Last Starfighter as a “guilty pleasure”. I definitely won’t call it that. I have very few guilty pleasures in life as I feel no guilt for the things I have liked in my lifetime (well in film and music anyway…). The Last Starfighter is one of my favorite films from the 1980s and I still enjoy watching it to this day, perhaps 25 years after the first time I saw it. When I saw the Blu-ray on sale at a local store for a great price I had to have it.

It’s a simple but effective narrative. A young man is somewhere he doesn’t want to be and dreams of being somewhere else. He feels like he is stuck. He breaks the all-time score on the local arcade machine featuring the movie title. Little does he know that the game is actually a test, recruiting space fighters for a war taking place in space to save human and alien-kind alike.

Starting the film I was amazed at how excellent the picture looked. This was remastered and is presented on Blu-ray as the 25th-anniversary edition. Skin tones and color clarity were excellent on the 62 1080p DLP which I viewed the film on. For many, the 3D visuals will look dated. I say, they look amazing. People need to put The Last Starfighter in its rightful place in history. This movie chose to use all 3D technology during a time when even the Star Wars franchise was still using model miniatures. For the 3D Nerds out there (I claim to be a 3D Modeler and Texture Artist myself) it may surprise you to learn the main fighter model was 1.5 million polygons. What we now play with easily in Zbrush or Maya took a super-computer cluster to render back in the day. The Death-Blossom scene is still the most impressive in terms of early 3D visuals. There may be some infamous major DNR going on here, but I liked the way everything looked.

A lot of people deride the Craig Safan musical score as too simplistic. It’s one of those 80’s staples where the main theme was used for both happy and sad moments by shifting temp and volume subtly. For me, the main score theme is one of the most powerful and triumphant musical cues in cinema history. The 5.1 upgrade is used to great effect here and you can’t help but smile as the main theme music swells triumphantly.

For me, The Last Starfighter is a great movie. It is perhaps too simple but it is a sweet film that captures the feelings of youngsters everywhere hoping for something better and dreaming big. Who hasn’t thought about being in the world that their games, movies or books inhabit? You can find the Last Starfighter on sale often at $9.99 price tag, making it more than worth it.