Last week’s episode of The Walking Dead, Cherokee Rose was kind of slow paced.  It serves as a setup for coming episodes, though we may not get all of our answers before the mid season break at episode seven. The focus was mostly on the “well zombie” as well as Maggie and Glenn having relations in the pharmacy (after Glenn grabs Lori’s pregnancy test). Shane continues his descent, Herschel continues to push for the group to move on, Daryl searches for Sophia and oh by the way, Lori is pregnant.

This episode opens with a flashback of Shane, Lori and Carl as well as Carol’s family, stopped on the highway prior to as they trying to flee the city. Shane is horrified as napalm is dropped on the downtown area. As we return to the present the group is laying out grids for the Sophia search. This episode is heavy on the funny lines, beginning with Dale making 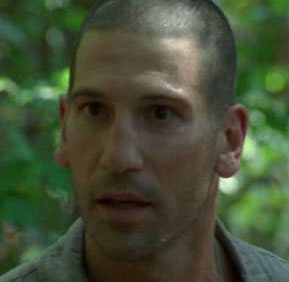 a comment about Daryl believing in Chupacabra. They laugh at him, but he says is just as outrageous as the walking dead.

Glenn shares an awkward moment with Maggie, letting her know they still have eleven condoms left. Maggie says “that’s eleven minutes of my life I won’t get back”. Zing! Shane and Rick search their portion of the grid, recounting old times in high school when Shane was quite the ladies man. Remember that Rick still has no idea about Shane and Lori, and no one but Lori and Glenn know that she is pregnant, and still further none of them including Lori know who the dad is.  The conversation with Shane immediately turns dark as he believes the search is worthless and challenges Rick to make the “hard decisions”.

Daryl is alone in his search and finds Sophia’s doll in a river bed.  His horse is spooked by a 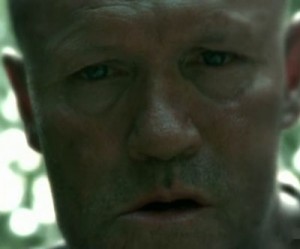 rattlesnake and he fall down into a ravine, hitting his head and impaling himself with an arrow in the process. When he hears noises in the woods he immediate wades through the water to find his fallen crossbow. He then begins a steep, painful climb out of the river bed only to fall a few feet from the top. He is furthered injured and now delirious/unconscious.

Herschel is angry that Daryl took a horse and Jimmy went on the search. Jimmy said he had permission, but he didn’t. Herschel says, “I’ll control my people, you control yours”.

Enter Merle to taunt his baby brother. We quickly realize that Merle is an illusion brought on be pain and blood loss. Not only does this bring back a popular character, played by a great actor, Michael Rooker, but it gives us more of the back-story on Daryl, a character not in the original source material. Merle does two things, in a backwards way he motivates Daryl to climb out and save himself and then at the same time he tries to sow seeds of doubt as to Daryl belonging with this group.

Merle starts tugging at Daryls boot and then we crossover back into reality and it’s a walker about to take a bite out of Daryl. As he struggles with one and other emerges from the woods. Daryl bludgeons the first attack then pulls the arrow out of his side to brain the other one with his crossbow. This is why people love Daryl, he’s a badass. Daryl uses the negative motivation to get up and get moving.

Herschel “counsels” Maggie to stay away from the “asian boy” and not to get “close to these people”. Andrea is still being a pain in the ass and rude to Dale.  Glenn tries to talk man talk with Dale and lets him know about Maggie. Dale is not happy, but Glenn sadly states he did it because, “I was thinking that I might be dead tomorrow.”

Andrea spots a walker, but it’s really a battered and bloody Daryl in the distance. Andrea is really eager to prove her worth and shoot the walker with a rifle. She is repeatedly told not too as Shane, Rick and T-dog approach. She decides that she’s going to do it anyway. As the

boys figure out that it’s Daryl, she takes the shot and he is down.  After an agonizing commercial break we find she only grazed his head. Cue sigh of relief.

Daryl is going to be okay. Lori is not. Dale helps out Andrea with some humor, and they’re probably gonna be OK. Shane is willing to sacrifice children to save Lori and Carl, no mention of anyone else. This is only going to get worse. Maggie and Glenn are caught exchanging notes over dinner. Maggie reads hers later only to panic after discovering Glenn has chosen the hay loft as their rendezvous spot. Finally the secret of the barn (somewhat) is revealed as it’s full of walkers.