Last weeks Walking Dead Episode – Chupacabra, saw the “return” of Merle as Daryl struggled with being injured after falling into a ravine, twice! Laurie was pregnant, and now Glenn knows, but she still hasn’t told Rick. Glenn tells Dale about his rendezvous with Maggie, and a second encounter at the barn reveals the secret kept all this time, the barn is full of walkers.

Carl is up on his feet and feeding chickens, he notices that there are some missing. It’s because they’re being fed to the walkers, after their legs are broken so they can’t get away. That’s lovely. Glenn discusses the barn with Maggie. Now he has to hide both Lori and the barn, and as he says, “he sucks at lying”. Glenn’s guilt leads to some comic moments, the last two episodes have been full of them. Andrea apologizes to Daryl. He’s cool with it, as long as she knows, “if shoot me again, you best pray I’m dead”.

Glenn offers to go into town for Lori’s “medical condition”. He is a good guy trying to do the right thing and she is too guilt-ridden to a) let him help and b) tell Rick the truth. Carl is discovered with a weapon, which leads to a confrontation between Rick and Lori. Ultimately it is decided that he needs to know how to handle one, and Shane is the best teacher, so he learns along with everyone else. Andrea, in particular shows an aptitude for it. As soon as the group is gone, Glenn spills the beans to Dale.

While the others shoot, Dale confronts Herschel. The walkers, are his wife, family and friends. He is convinced it is a medical condition. Dale tries to convince him otherwise. This will only increase tension between the groups. Later it gets worse as Lori attempts to thank Herschel for his help, only to learn that they will be “moving on soon”. She confronts Rick and scolds him for keeping secrets; pot meet kettle.

Shane tries to motivate Andrea into shooting by berating her. She cannot do it. He continues to badger her saying, “that’s the walker that got Amy”. Andrea is horrified and leaves.  Shane follows in the car and offers half-assed apologies along with the opportunity to check out a planned development where Sophia may be holed up. She is pissed but too excited at the opportunity to be useful and fire more weapons.

Dale breaches the barn and then he breaches the pregnancy topic, speaking to Lori. Lori is terrified at the idea of bringing a child up in what the world has now become. She walks away wounded, Dale cannot find a justification for keeping the child.  Lori sends Glenn on another errand for “supplies”, Maggie tags along so that she can yell at Glenn for giving up her secret. Turns out Lori has asked for abortion pills. As Maggie searches the pharmacy and walker grabs ahold of her. Glenn dispatches the walker in style and you get the feeling Maggie might just now understand that the walkers are not “afflicted” they are re-animated killing machines.

An enraged Maggie returns to camp, yelling about her abortion pills. Maggie is falling for Glenn, she is afraid of losing him.  She wants him to stand up for himself, she sees, as we have that Glenn is too often the bait, considering he is one of the most resourceful and intelligent group members. Meanwhile Andrea and Shane explore a cul-de-sac, with a home that has walled off sections.  It seems as if the home is fill of a mass-suicide both 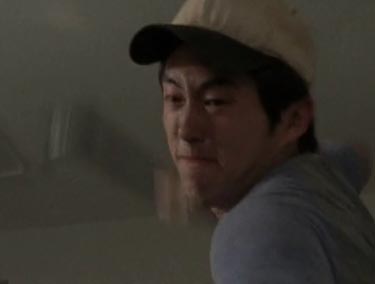 upstairs and in the garage. Walkers begin to invade from the partially ajar garage door. The duo fires, Shane more successfully. Andreas weapon jams but Shane lets the walkers gain ground, forcing Andrea to take action. She finally does and then goes on a shooting spree. Suddenly she is taking some sort of sick pleasure out of it. It gets her riled up enough that she puts the moves on Shane during the ride home. Which is strange considering his dark and twister turn and treatment.

Glenn explains to Lori about the attack at the pharmacy. He offers prenatal vitamins as an alternative to the abortion pills. Glenn asks if they are friends, which Lori affirms. So he offers this advice, “your choice… maybe shouldn’t make it alone”. Lori swallows the pills anyways but then runs into the woods to throw them up, leaving the evidence behind which Rick finds. Rick and Lori have yet another heart to heart. She finally spills the beans on her and Shane. Rick knows, “of course he knows”, he says as if to convince himself it’s OK. Who knows what happens from this point on.

Dale confront Shane on their return. He does this for a number of reasons, it’s up to us to decide where is motivation truly lies, but as he says “he is looking out for the group” and he of course has affection (what type?) for Andrea. Dale openly wonders about the night Otis died and is unsatisfied with the answer.  He brings up the moment when Shane had Rick in his gunsights. When he says that he knows “what kind of man you are” cue the creepy tones and the darkness of Shane envelops the screen as he threatens Dale in a most menacing tone. Dale is a badass for standing up to Shane. Shane’s descent is coming to it’s end…

Catching up with Boardwalk Empire – Episode 5