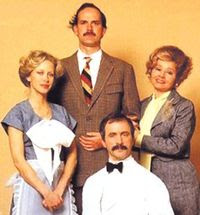 The Watch Now function of Netflix has become a fascination for me… it might become an obsession should they choose to up the quality and variety of things available to watch. Mostly I have been watching documentaries and TV shows with the feature. The Office both British and American versions, and most recently Fawlty Towers.

Now I am a life-long Python fan, having been raised on the stuff (for good or ill I have yet to fully understand.) I remember seeing bits and pieces of Fawlty Towers when I would stay up to late and turn it to OPB. I didn’t remember liking it, but I didn’t remember disliking it either.

Watching now I am happy to say that it is excellent. I love reading moronic reviews of things on Netflix. Someone was complaining of the slap-sticky nature of the whole thing. True, physical comedy is a John Cleese forte, but this character, formed from a hotel manager that crossed paths with python is much more… subtle dialogue here and there, and excellent character interaction make it a more sophisticated work than Python (but I will always love MP more…)