I queued up 44 Inch Chest for a couple of reasons. The first being the amazing cast that it had listed, not the least of which are Ray Winstone and Ian McShane. The second reason would be that I have enjoyed many of the British Gangster films from the more recent The Limey and Sexy Beast, all the way back to the original Get Carter with Michael Caine. 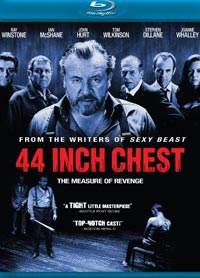 To compare 44 Inch Chest to those other gangster films would not be a good way to approach the film. What the film really does is portray the manic anger, confusion and border-line insanity that can result from being cheated on; particularly in this case how it affects a married man played by Ray Winstone who happens to be a gangster of some sort.

Joining Winstone and McShane are John Hurt, Stephen Dillane and Tom Wilkinson. They are Colin’s (Winstone) “friends” and in a way individual elements of a broken man’s psyche. They can be viewed as the individual pieces of the break-down literally and figuratively of a man. Colin has been cheated on by his wife, Liz, played by Joanne Whaley, who informs him that she doesn’t love him and is leaving, the resulting psychic and physical darkness make up the bulk of the film.

Throughout the course of the breakdown, McShane is the voice that says, be free of “entanglement” and finish the act of revenge. Dillane plays the friend and portion of Colin who will carry out the revenge without a care. John Hurt is the angry old prejudiced side and Tom Wilkinson acts as the old reliable friend, who is there because that’s what he does. Colin, or the man that was Colin, is the loving and caring husband, who is doing the right thing, unaware of reality. 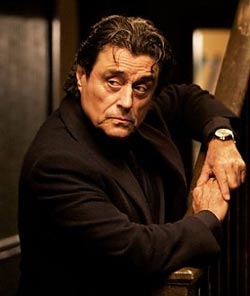 The cinematography is all single-camera. The director, Malcolm Venville, was heavily influenced by Hitchocock. This camera setup does the dialogue-heavy film a great service. It allows for extended focus on individual characters and the amazing writing. A shallow look into the film might only hear the cursing and dismiss any notion of sophisticated dialogue; many people made this mistake with the show Deadwood, which featured Mcshane. Each character’s lines have a rythym to them. Singularly they are something akin to a Shakespearean monologue; together they work as individual instruments in a sort of conversational symphony.

This film really caught me off guard. For those who haven’t experienced anything, at least at the basic concept level, of what this character is going through, this provides some good insight, al-be-it in a in display of amplified mania at most times. Perhaps the best line of the film comes from McShane who tells Colin, you’re “not pathetic, not weak. You’re human, and humans hurt.” That really distills it all down, especially for the man who is supposed to be strong.

I have heard and read critics, legitimate ones, complain about having too much dialogue, something they would praise in classic films or in something from Quentin Tarantino. Not every film needs to be millions of bullets and action every second. I have also heard complaints about misogny. On the contrary, Colin loves women, or more specifically his wife. His brain somewhat literally short-curcuits and his actions are wrong. But he knows they are wrong which ultimately leads to the film’s conclusion. 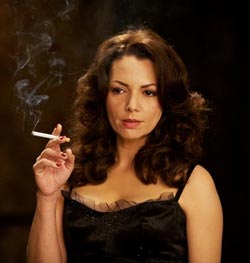 The British Blues on Blu-ray

44 Inch Chest on Blu-ray displays the muted color of the film nicely, the dialogue is clear and concise, with the occasional deep rumble, the simple, yet effective Angelo Badalementi score is emphasized when needed. Some extra include the actors in character performing short epilogues, a “where are they” two years later short. There is also a Making Of featurette and an twenty-plus minute interview with the director.

I recommend this film. I suggest going it with open mind and knowing that you are supposed to feel squeamish at times. Love, or more directly, the loss of love can make people do and say strange things.