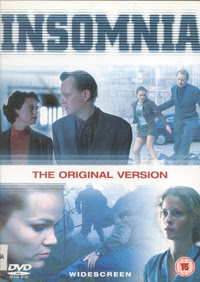 So in my sleep-deprived brain I have realized that as I am mid-way through the first week of my break… and as such I should get back to watching my queue of Netflix movies, including the 3 films which have been sitting on my coffee table for nearly a month.

First on the list is the Criterion Collection’s presentation of Insomnia, the original, released in 1997 and starring Stellan Skarsgård, whom most will remember as Bootstrap Bill in the last two of the Pirates of the Caribbean trilogy.

Now I like the the new version of Insomnia, although Pacino has become a caricature of himself and Robin Williams often tries too hard to be serious when not in a comedy. Hillary Swank was adequate, the over-all story was well put together.

The essence of the story is there from this original version. We loose some of the backstory explaining to us the motivations and situation of the main detective, this makes the shooting of his partner feel more sinister by it’s cover-up. There is no big dramatic death scene between the Swank and Pacino characters in the original Insomnia either. Simply the knowledge that the female character knows what Skarsgård’s character did. No contrived death-bed Hollywood confession, just the acceptance that the bad guy was caught, and he is going to have to deal with the guilt… the haunting of what has occurred.

I rated the original slightly higher than the remake. Skarsgård is much more commanding of the screen here in the original Insomnia, even if his motivation doesn’t really feel clear to us as viewers.