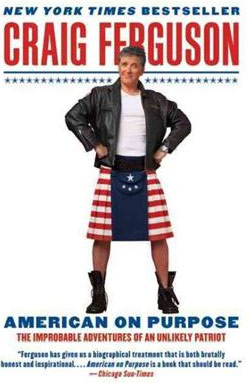 American on Purpose: The Improbable Adventures of an Unlikely Patriot is the autobiography of Craig Ferguson, whom most of you will know as a)Host of the Late Late Show or b)that guy that played Drew’s boss on The Drew Carey show. His journey from the small Scottish town of Cumbernauld outside Glasgow is a great read and is exactly the type of story one would associate with immigrants following the “American Dream”. I shall borrow words from other people so as not to regurgitate too many cliches in my own thoughts on this book. The Chicago Sun-Times quoted on the book’s covers reads as follows, “Ferguson has given us a biographical treatment that is both brutally honest and inspirational… American on Purpose is a book that should be read.”

I, like many of you, first took notice of Ferguson on Drew Carey, because he was delightfully evil as the boss that tormented Drew. His ridiculous English accent, which he himself calls it in the book, was a perfect fit for the character. It was interesting to find out that Ferguson often thought about quitting the show, as he was bored by the work. This also was not the first time that Ferguson thought about (and actually did with an earlier job) leaving something that was both profitable and successful for him.

The power of Craig’s story hinges on two things: an early trip to American with his father and an early addiction to alcohol. The initial trip to America served as a beacon that pointed to a life long goal, 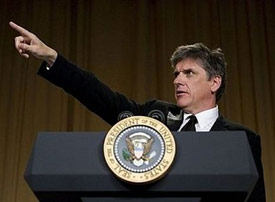 and the alcohol was the internal nemesis that tried its best to stop him from reaching that goal. The book goes through all the ups and downs, as the quote earlier said he is brutally honest. Some of the things he describes, does and goes through are truly cringe-worthy, yet at the same time the charm that he exudes so easily on The Late Late Show comes through in the book very well. Just at the moments when things are most serious and at times heart-wrenching, Ferguson usually has something funny to say to set you at ease and remind you that he made out okay; conquered those demons, and survived to reach his dream. He became American on Purpose.

Ferguson is right near Letterman on my list of late night performers currently on television. The top spot for me, as most of you know is reserved for Conan. Ferguson has some nice things to say about both of them. Conan has the intellectual and educated zaniness of Monty Python, Letterman has the cranky old man sarcasm I dig, and Ferguson is the sly wink-wink charmer always creating the laughs that somehow get him out of trouble. While it’s rare for me to watch late night television anymore (I’m often reading or writing at that time), If I’m by a television when he’s on, I watch Ferguson. More often I seek out his best bits on Youtube. To see the range the man is capable of, find his interviews with people from his neck of the woods like Shirley Manson or Gerard Butler and then go to the other end of the spectrum and watch the wonderful eulogy monologue that he gave when his father died. It is sad and funny and honest.

American on Purpose is available in bookstores now in paperback for around $14.99 ($10.49 at Amazon). His first novel (fiction) Between the Bridge and River is also available. I hope to obtain a copy of it shortly.