The Call of Juarez features a spiritual-successor storyline to the original games. One of the main characters, and if we’re honest the focal point of the game, is Ben McCall, ancient ancestor to the Reverend Ray McCall, gun-toting preacher from the previous two games. That’s kind of where the connection stops.  There are dialogue references and even scenes that are supposed to take place in locations from the original games. It’s a weak call-back at most.  McCall’s voice is appropriately gruff and matches that of his fore-runners quite 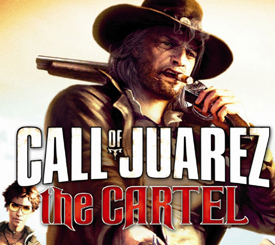 well. He even manages to spit out some biblical references in the game’s pseudo bullet-time concentration mode.

McCall’s dialogue is the strongest of the lot, which isn’t saying much given the weak script.  I find myself often saying this, the storyline itself is passable. There are some forced moments of drama, one in particular featuring the daughter of one of McCalls old Vietnam buddies actually works to draw some emotion, though there’s not enough of a build-up to payoff for most people.

The cast is flushed out with a black female FBI agent and hispanic male DEA agent joining McCall in a special task-force.  I like the diversity, but it feels like the stereotypes are played up to try and give them strength as characters and it doesn’t pass muster for my tastes.  Most of it has to do with the dialogue, of which the one-liners during combat are the worst.  Fans of the original Juarez games will most likely be disappointed. The game is also very short even on the hardest difficulty setting.

Fear 3 – Fear Hard with a Vengeance

I’m not a huge fan of this series, though I think it’s alright and I’ve played through both games and two spin-offs, which are now considered “non-cannon” to the overall storyline arc.  I found this sequel to be less tense and scary than the previous two games.  There are lots of outdoor areas which pull the game away from the shadows and get the game into

I’m not sure that the straying from the shadows is what has lessened the atmosphere of the game for me, but it maybe be more-so the “cheap” thrill that lay within that darkness.  Most of these scares don’t deviate enough from the first two games to be new and thrilling or get the adrenaline up.  The sound design again is good and the models and textures are decent.  Blood trails and spatter are quality as always.

Fans of the series will probably enjoy the game and the added perk of being able to play as Fettel, the lead character’s brother in every level of the game that has already been completed.  Fettel is endowed with powers from Alma, spoiler alert! spoiler alert, both of these character’s mother, though she is represented most often by a creepy looking, bloody child.  Fettel’s powers were fun to play with for a little bit after running through the game, which again is a very short one.

Catherine – From the WTF?! Genre

I’ve only played this for a little bit and I’m not sure if I’m going to continue. Here is how I attempted to explain it to a friend over instant-messenger.

The overall idea seems to be leading towards wanting you, the player and lead character, to think about the validity of marriage and taking the steps towards committent in a long-term relationship. And if you have any doubts or cheat (one of the things that turned me off pretty quickly is that you as the character cheat on your girlfriend without any choice or say almost right off the bat) on your partner you will be cursed and a long-nailed Freddy Krueger-clawed female will try to murder you and other single men (who appear as sheep in your nightmares, get et?!) as you navigate through Q-Bert-like wall-climbing puzzles. Gotta love Japanese culture, film and games, but I’ll go back to my Yakuza series I think.

P.S. Pervs, there’s no nudity in this game, it’s just a big tease for you as you play a what appears to be, though with plenty of Japanese quirkiness, an attempt to make a game that deals seriously with relationship issues.

Knights Contract has been Revoked