Where the Sidewalk Ends is a 1950 Film Noir starring Dana Andrews and Gene Tierney. The writers for the film were headed up by Ben Hecht (making his second appearance on our list after 1946’s Hitchock masterpiece Notorious). The wonderfully simmering, desperate musical score was composed by Cyril K. Mockridge, perhaps best know for his television work with the music for Lost in Space and his Academy Award nomination for 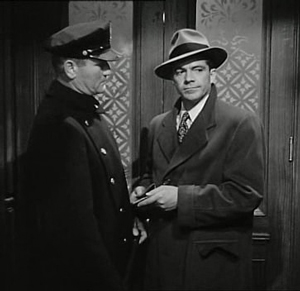 Guys and Dolls. Cinematography was provided Joseph LaShelle, most famous for working with two directors, one of which was Arthur C. Miller in a long partnership.

The other director LaShelle is know for working with is Otto Preminger, who takes on directing and producing duties for Where the Sidewalk Ends. Interestingly enough Preminger has a history, especially later on in his career, of pushing the boundaries of Hollywood censorship, with subject matter often deemed taboo at the time.  While Where the Sidewalk Ends does deal with the corruption of the police force, it falls into a category deemed “low-risk”, keeping itself clear of the wrath of political critics (mostly conservative).

This film is also decidedly low-budget though to my eyes it holds up well to the test of time both in narrative, filming and performance.  The low-budget aspect secures one of the tenants that some put forth as part of the definition of a true Noir film.

Running out of Room

Dana Andrews takes the lead as Detective Mark Dixon, a rough-and-tumble loner of a cop who is on his last legs with the department due his use of physical force against suspects.  When a new Detective Lt., played by a very young-looking Karl Malden, shows up to lead the department and reign in Dixon, the chief lets Dixon know he’s out of chances.

A murder occurs in a gambling room of gangster Tommy Scalise.  Dixon knows that Scalise is good for it, but lacks evidence.  Scalise is trying to pin the job on a man named Paine.  Paine is a drunken lout and estranged from his wife Morgan, played by Gene Tierney.  Dixon heads to Paine’s apartment to get the real story.  Andrews’s work in these scenes is well done. Reading his face, you know he’s trying to stay on the level, but when Paine takes Dixon down with punch he returns the favor. The only trouble being that unbeknownst Dixon, Paine has a plate in his head from the war. When his head hits the ground, Paine dies.

As many of our Noir leads do, Dixon makes his fatal choice early on. Rather than face the music and plead self-defense, he dumps the body in the river.  This, we know, is the beginning of his downfall. Dixon’s trail of lies attempts to pin the blame on Scalise at the same time he is getting close to Morgan, Paine’s estranged wife. Problems are compounded when Morgan’s father, Jiggs Taylor, is identified as having been at the scene of the crime near the time of death.  We know and Dixon knows that Jiggs was there to give Paine a piece of his mind for the poor treatment of Morgan, but Paine was already dead in the closet from the earlier fight.

The Desperate Attempt to Start a New Path

Dixon works tirelessly to bring down Scalesi and combat Lt. Thomas’s (Malden) quest to take down the wrongfully accused Jiggs.  As things become more and more desperate Detective Mark Dixon is willing to take on the gang single-handedly, along the way alienating his only friend in the form of his partner Sgt. Paul Klein, whom he is trying to save from harm in what is essentially becoming a suicide mission.  The end is something you should see for yourself. 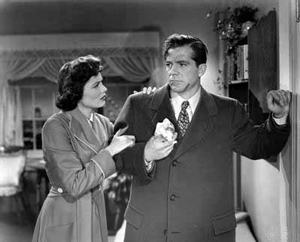 What’s important is that we know no matter whether or Dixon can get out of the immediate trouble he’s in or not, the Noir archetype and general film-making consensus and guidelines at the time say his misdeeds, pre-meditated or not, will have to catch up with him.

In classic Noir fashion, it appears that Andrews’s character has a chance to really break out of the bad pattern he finds himself in.  However, as always, time, circumstance and plain rotten luck bring dreams back to reality. In Noir the shadows are always fighting to take over the light and most of the time, they win.

Where the Sidewalk Ends Trailer