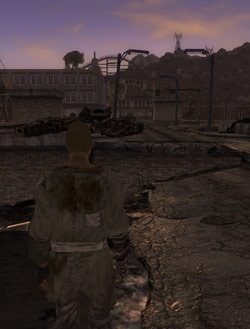 I made my way south along the remnants of the old highway towards Primm. With only my machete and a small caliber pistol, I was careful to avoid some of the wasteland inhabitants I could see in the distance, taking out only a mole-rats who wandered across the roadway.

As I entered the fringes of Primm I felt the need for caution. The main portion of the town lay left of the highway and was suspiciously quiet. That’s when I noticed the Blue Powder Ganger patrolling with rifle in hand. Some instinct took over and I immediately dropped low to the ground, positioning myself to the right of the highway and some busted out buildings. That’s when I spotted the NCR look-out.

Now, the NCR didn’t do anything to help Goodsprings, which I don’t like one bit, but they are at least some form of law and order in the wastes, and it’s obvious they have taken up position opposite the gang. I am going to see what’s what here….

Want something done? Do it Yourself

After speaking with the commander of the NCR unit, it was clear that the Powder Gang now controlled the main portion of the town, and the prison to the Northeast. I had scouted the prison earlier, and it was too dangerous in broad daylight, not to mention full of gang members. There were townsfolk somewhere in Primm, and I wasn’t about to let them come to a bad end. If the gang managed to completely take over Primm, would Goodsprings be next?

I’m now in what used to be the Sheriff’s office in Primm. These bastards have slaughtered 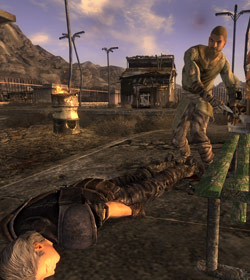 the Sherriff, and his wife and at least 2 other townsfolk that I could see. Making my way into the the hostile side of Primm was easy. I think that’s the courier skill-set taking over, it’s starting to come back. I took out one sentry silently, but then ran into two more They went down fairly easy, but I made my way into this home to regroup and treat a cut on the shoulder.

I feel bad taking the Sherrif’s gear, but it’s the way of The Wastes. We scavenge for what we need. His duster and hat will keep me protected from the sun. I feel like one of those cowboys from the old west, I vaguely remember reading about as a boy.

The town is home to two casinos, apparently I chose the right one. It’s dedicated to some sort of wasteland Bonnie and Clyde, and also currently houses all of the living residents of Primm. The residents let me know the gang was holed up at the other casino across the street. It’s obvious that these people are scared, and rightfully so… what the gang did to the sherrif and other townsfolk. They have a robot who looks like he could help out, but his current programming is set to tour guide.. I’ll look into fixing that later.

A Killing at the Craps Table

I was told the deputy sherrif was prisoner of the gang, and that I could make use of a security bot in a nearby home providing I could fix it. I found the bought and did my best 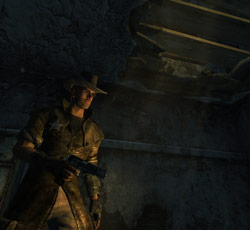 to patch it up. It’s code name is ED-E. While it’s fighting capabilities are limited, it has boosted a motion detection frequency on my Pip-Boy, allowing me to sense approaching movement from a greater distance.

This came in extremely handy when I took on the gang. The gang was drunk with celebration on the main casino floor, I would guess the patrolling guards inside and out were as well. I made my way into the casino undetected by the outside sentries and silently dropped 3 roaming sentries with my machete.

The deputy was hand-cuffed in the kitchen. I untied him and motioned for him to follow me back into the lobby area. That deputy, he’s a real piece of work. He politely excused himself from helping me finish off the rest of the gang. Coward. A side hallway revealed a room housing bones… bones too small… a dirty teddy bear lay in the corner of the room.

The next thing I remember was charging into the main casino area. The rusty old 9mm from the Sherrif’s shack announced my arrival. When the bullets were gone it was just me and two gang members. I was so angry… so filled with rage, it was over in seconds.

Tomorrow I will head to the prison and finish off the rest of the gang, or I won’t come back at all…