Way back when I had the idea of presenting reviews and analysis of all the major gold film reels of actual Noir titles featured in the game L.A. Noire. Life has a way of changing plans, so the project never got very far. However, a few of them still get good traffic, especially Notorious, which has even been linked to some academic institutions. What made me check in on my old project was the scheduled showing of Detour at the stellar, local venue the Hollywood Theatre. Janus Films has remastered the title with a 4k restoration in 2018 and has been released under the estemeed Criterion Collection banner. Check out the 4k restoration trailer below followed by my original thoughts and analysis for the LA Noire Gold Film Reel Project.

In our continuing look at the 50 Gold Film Reels of L.A. Noire, we now discuss 1945’s Detour, starring Ann Savage and Tom Neal. Detour is a brisk 68 minutes long and has classic elements of “B” Noir thrillers that popularized the genre. Detour was adapted by the writer of the novel of the same name, Martin Goldsmith. Austrian director Edgar G. Ulmer, born in the Czech Republic and raised in Vienna, did early work as a set designer on Metropolis and M.  Having been brought up watching and working on early films with a heavy influence from German Expressionism, Film Noir was a 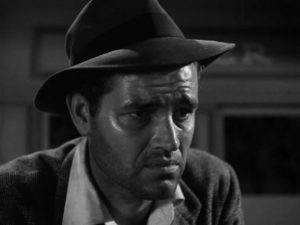 natural choice for the director.

The two acting leads of the story, Tom Neal and Ann Savage, are best known for their work in this film.  Tom Neal, unfortunately, became more known for nearly beating a rival to death, which cut his career short, and later a manslaughter conviction for killing his third wife.  He died shortly after his release from prison.  Ann Savage was a model and pinup girl who began making films in the early 1940s.  She first teamed with Tom Neal in Two-Man Submarine and then The Unwritten before making Detour in 1945.  All-in-all, though reports said they didn’t think highly of each other, Savage and Neal made five films together, with Detour being the most successful and popular.

The focus is on a troubled young man, sitting in a diner.  He is obviously on edge from his interactions with other patrons and the staff.  His mood is further exacerbated by a song played on the jukebox.  He becomes almost manic before settling back down on his barstool, defeated.  Our story then begins to unfold through flashbacks; we focus in on this young man’s eyes as if to see directly through them and into the recent past.

Al works as a piano player at a bar, where his girlfriend Sue sings.  Sue decides that she’s going to try her luck out in Hollywood, leaving Al behind. He grows sullen but continues his late-night piano-playing gig.  One night a large tip from a drunken patron sets Al on a journey from New York to Los Angeles. The trip is long and miserable, with Al’s “big” $10 tip not getting him very far.  When Al meets Charles Haskell, Jr. a bookie on his way to L.A., things look like they’ve taken a turn for the better.  An accident leads to a major “detour”. 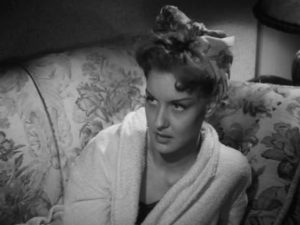 Al assumes the identity of Haskell when he feels there is no other option.  His kind nature leads him to pick up a hitchhiker, the shifty Vera.  Problem is, is that Vera is wise to Al’s predicament.  Now it’s a race to see what will destroy Al first, his conscience or Vera.  Vera is the ultimate femme fatale villain.  This is no damsel in distress, she’s all kinds of bad news, with an agenda that only benefits herself. Her moods are unpredictable, from standoffish to inviting, briefly kind then on to raging.  One final fight between the two as Al tries to get away from one of Vera’s schemes leads to another grave accident. Another weight on Al’s shoulders which he visibly carries.  Here at the end of his journey, in L.A., he is now forced to turn around, to run from the problems created by horrible luck and by a scheming dame.

This was considered to be a “B” film at the time but met with positive critical reaction.  Shot on a shoe-string budget in less than one month, it has now come to be considered a prime example of the Film Noir genre and carries all of the traits you would expect.  Our story is told in flashbacks; at the beginning of each one we zoom in on Tom Neal’s eyes, the light grows dim except for the eyes as they reveal our story.  Neal gives us the classic voiceover, so often heard in Noir, particularly in 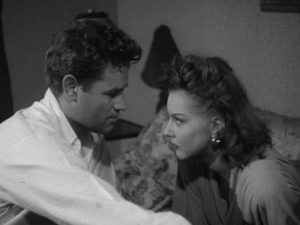 Al and Sue have a troubled relationship due to being “stuck” in a small town lounge bar. When Al tries to take action to correct his situation, he’s set upon by a string of bad luck, starting with an accident and a poor decision on a classic “dark and stormy night”.  Trouble is furthered when our femme fatale arrives on the scene.  She’s a drinker, a schemer and plain crazy.

In the end, we’re left with a man burdened by conscience, and, both in our story and by the Hollywood code of the time, a man that has no chance of escaping the physical and mental demons chasing him down.  Detour is a fine example of classic Hollywood Film Noir. and as luck would have it, this film is public domain.  Watch or Download Detour 1945 for free. I can’t vouch for the download quality, but the DVD version I saw had quite a lot of grain and some clicks, pops and jump cuts.  Little bits of dialogue were lost from time to time, but not enough to damage the plot or story in any way.  Detour DVD versions are listed below. I recommend this short, classic Film Noir, as Savage herself said this is one of her finest roles and was ahead of it’s time for reversing the roles; emphasizing the power of the female over the male performance.