I spent a few hours with Arkham City this evening. I have to say that I can definitely see where all the positive hype is coming from. As I discussed in the preview article, Arkham Asylum was a bit of a surprise.  There wasn’t much to complain about with the first game and from my initial play-time it feels as though they have been able to improve on virtually

everything somehow. I made the brash decision to go ahead and begin my play-through on hard difficulty, having recently replayed Asylum in Hard mode.  Now, maybe it’s just me but this game feels to have amped up the difficulty.

Arkham City’s world is large and open and you can encounter groups of gangs almost anywhere.  Even the small groups tend call in reinforcements having you fight at a bare minimum a dozen foes at once. When a game gives me free roaming and load of side objectives I tend to forget the main quest for large portions of time. So it is, that after several game-play hours I have managed to complete only 3% of the games main quest.  Within a half hour of playing this game I had already encountered Dr. Strange, Two-Face, Catwoman, The Penguin aka Oswald Cobblepot, 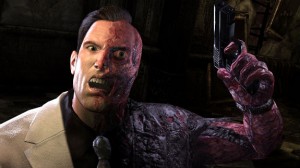 Bane, a mysterious unnamed observer and had the Riddler chirping in my ear.  There have already been mentions of Mr. Freeze amongst bantering Arkham City residents (aka prisoners) as well.

The graphics are excellent, dark and moody and light touches of snow are always good in my book. Combat remains fluid and you have one of you power takes downs fairly quickly along with most of your gadgets. Be careful when roaming freely, there are inmates with firearms not far from your starting point and firearms are death for The Bat nearly instantly on hard difficulty.  Weapon upgrades are done through VR Challenges which all seem to involve advanced versions of Batman’s gliding mechanics. While I successfully completed the first set to upgrade my grapnel, I am having difficulty mastering the dive mechanics for some of the new challenges. 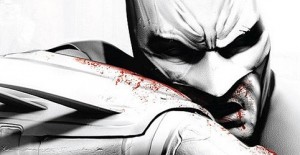 The music seems to have taken it up a notch from the first and become even more cinematic feeling to match the visuals.  Everything in general is just expanded in quality including counters and takedowns which can now include multiple bad guys simultaneously. And, I almost forgot to mention, pre-orders should have received a copy of the Catwoman DLC. This should be installed immediately. Catwoman’s combat is not as strong, but increases the acrobatics and speed. It’s really beautiful animation. I can see a lot of hours being “wasted” on this game, but the first play-through is going to need to speed up; we’ve got Uncharted 3, Skyrim and Assassin’s Creed revelations mere weeks away.  So many games and so little time.  Batman Arkham City is definitely recommended.