Hey folks, this evening I wanted to share two  mini-reviews for a movie and a game.  The movies is Moon and the game is Darksiders, hence the oh-so-clever post title.  For you non-gamers, I will start with the Moon review. 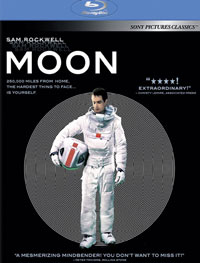 I finally got to watch Moon this weekend, thanks as always goes to Netflix for helping me to catch up on the gems I have missed and the many other movies that I should not want to watch.  Moon definitely falls into the gem category. You probably most recently remember Sam Rockwell in Iron Man 2 as the head of the opposing weapons contractor to Tony Stark.  I most recently remember him from a small indie I watched earlier this year called Snow Angels.  Where he gives a wonderful performance as a very tortured soul trying to do the right thing.  Moon is another fine performance from Rockwell.  Truly I think it’s one of the better performances I have ever watched.  I try to remain spoiler-free on the blog and in articles until a fair amount of time has passed. So… if anyone wants to discuss the major plot points of moon please use spoller takes “<spoiler>comment</spoiler>” when doing so.  Suffice to say that the emotions conveyed are wide-ranging and well performed.

The Blu-ray has a really clean look and feel and shows of the predominate use of scale-miniatures very well.  The sound is minimal but very sharp and well-rounded where it needs to be.  Clint Mansell delivers another exercise in score-minimalism that is just as powerful as large bombastic orchestral scores in their own way.  Again, I highly recommend this Sundance Film Festival favorite as a good story and a great showcase for the talent of Sam Rockwell. 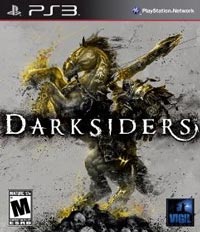 I’m kind of disappointed at the press for Darksiders.  While average grade is an 8 out of 10 it doesn’t seem that the reviews have drummed up enough excitement for the game.  The first few months of it’s release at the beginning of the year showed fairly poor sales numbers though the reviews, again, were good.  Thankfully it sounds like sales have picked up since then, possibly enough to get the game a sequel, which I would like to see.  A lot of complaints about the game are that it’s a God of War clone.  Every 3d action/adventure game that is melee-based these days is called a God of War clone.  What’s so wrong with emulating a style that has been so successful I say.

Darksiders has a rich story all of its own.  Instead of Greek mythology like that other game series, this is more biblical mythology-based.  The story is a good one, but the true strengths of the game are with it’s art style, obviously influenced by comic-book legend turned gaming creative art director Joe Madureira, the fighting mechanics and the wonderful orchestral score.  The character design is superb, I would love to see a book of the concept art from this game.  Everything works together to create a cinematic feel; it makes sense that Madureira has been shopping a script around in Hollywood.  The game is definitely worth a play.  You can find it averaging around $35 these days, though I have seen it on sale at Gamestop recently for as low as $20.  At that price-point Darksiders is more than worth it.  Here’s hoping for Darksiders 2 featuring another, or possible all of the 4 horsemen of the Apocalypse.