There do be spoilers ahead, so be aware!

There is a brief opening sequence which deviates from the graphic novel.  The character of Rick Grimes played by Andrew Lincoln walks among the skeletons of abandoned vehicles along the highway and has to face a zombie-fied little girl.  With only the smallest amount of hesitation and a face full of remorse and regret Rick takes the girl down with one shot.
At first this scene bothered me because I felt that it would take away from scenes later and that we should jump right into the story at the proper starting point akin to the graphic novel.  In retrospect, the later scenes were powerful enough to overcome the intro, and it also served to abbreviates fears of the network and the show pulling punches with regards to content.  It does not seem they will be doing that.

We then jump right into the story as laid out in the comics with some extra dialog fleshing out the friendship between deputy Grimes and his partner Shane played by Jon Bernthal.  This is important to establish the camaraderie between these two characters, and to lay the framework for a troubled marriage between Rick and his wife.

We then go directly into the shootout which gets Rick shot and leaves him in the hospital. Rick has visions of Shane visiting and awakens, talking to Shane only to find no one there, and the flowers he had been brought wilted and dying. The horror around him starts to slowly unfold. By the time Rick sees his first corpse he is frantic. He comes across a room barred and chained, with a warning about the dead. Undead hands reach from the cracks in truly creepy faction, and Rick stumbles away at as quick a pace as his atrophied muscles allow. The build-up in pace and music, as well as Lincoln’s reactions really give the show weight thus far. 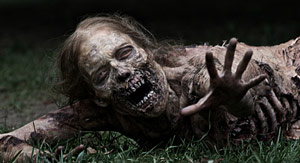 Rick continues his slow escape through the wrecked city. He comes across a bicycle and is startled by his first encounter with the undead, and crawling torso the reaches for him. He makes it home only to find no one there and the evidence of frantic packing. His sanity is cracking at this point and he questions if he is truly awake before sitting on the front porch disoriented. This is where the shovel hit him in the face. Rick, meet Morgan and Duane.
Morgan questions Rick thoroughly about his injury, asking if he has been bitten. At this point, Rick still doesn’t truly understand what is going on. Morgan explains things. It is clear that Morgan’s wife has “turned” and wanders outside. Some really good acting in these sequences. Rick gets some food and some time to recover and they head to the police station to get a clean shower, and some guns and ammo. Rick is moving on to Atlanta, Morgan isn’t ready…

On to the City

As they part company we have the best scenes of this first episode. Morgan picks off walkers from the upstairs window, trying to lure his wife out in the open. When she appears he can’t do what he needs to and wants to. He struggles, urging himself to pull the trigger. At the same time, Rick returns to the spot him picked up the bicycle and tracks down the torso that he saw earlier. The make-up and shots here are so good. You feel pity for this thing, for what it once was, for what it has become, slowly dragging itself pointlessly forward. Unlike Morgan, Rick pulls that trigger, and moves on towards Atlanta.

We finally see that Rick’s wife and son are alive and camped outside of the big city. Shane is 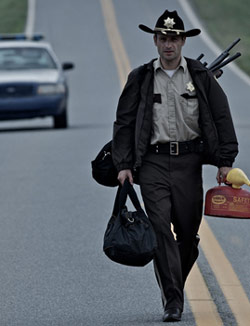 there too, and the story reveals the beginnings of a huge potential conflict as Shane and Rick’s Wife Lori appear to have something going on romantically. They also let us know that Atlanta is a death-trap full of walkers.

Rick arrives via horseback from a ranch outside of town, only to run into waves of the undead, getting the poor horse killed and losing most of his weapons in the process. Just as we think he’s had it underneath an abandoned tank, he looks up and realizes the bottom hatch is open. The episode ends and he is surrounded by walkers, trapped in a tank, and anunfamiliar voice contacts him through the tanks CB.

Very strong opening for the Walking Dead, covering the first couple of issues of the written series. Some great acting here so far as well, and as I said, they really aren’t pulling any punches as far as the violence is concerned, which is essential to the characters and the story. This narrative has to go to some pretty dark places, and I am feeling confident that they are going to let them happen.