Appropriately kicking off AMC Fear-Fest, a roughly two-week long section of programming geared towards the Halloween holiday, is the season two premiere of The Walking Dead. We are treated to a short montage going over some of the major plot points. If we remember, The Walking Dead Season One ended with a bang, a literal one as the CDC building self-destructed taking one of the surviving crew with it. Dale, forcing Andrea’s hand, barely escaped. As season two begins Rick sits atop a large building overlooking what we presume is Atlanta.

The Walking Dead – What Lies Ahead

Rick gives the walkie talkie a monologue, aimed at Morgan and his son from episode one.

It mostly just bring us up to speed and gives us a glimpse at Rick’s mindset; grim to say the least. As the crew begins to make their way down the highway they run into trouble.  The RV blows it’s radiator as they weave their way through a graveyard of cars.  It’s not long before the walkers show up, but not from ahead, a “herd” approaches from behind.

As the crew hides underneath vehicles, T-dog slices open his arm.  It looks like he’s done for, until Daryl saves him and covers them both up with walker bodies. Yuck. Sophia leaves the safety of a car too soon and it looks like Carol may watch her daughter eaten alive…. but she escapes.  Two close calls pretty quickly in. Andrea is attacked inside the RV’s bathroom. Dale on top of the RV, gives her a screw driver which she uses to dispatch the undead assailant.  Rick gives chase towards the walkers and Sophia.  When he catches Sophia he has her hide while he leads the walkers off.  Again, she leaves safety too soon and never makes it back to camp. Rick dispenses the baddies with a large rock.

In the graveyard of cars Carl discovers a cache of bladed weapons which the crew arms themselves with to avoid the noise of firearms.  Andrea is mad at Dale for “saving her” and she wants a gun which Dale won’t let happen. The majority of the group set out to find Sophia, eventually finding a church when they hear bells in the distance.  The church has 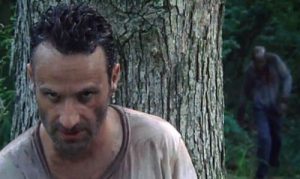 no bell-tower, just a speaker on auto-pilot, and a few dead inside. Zombies go to church still apparently; there’s a joke there somewhere. One cleaver, one machete and one hatchet = three walkers down.

Lori seems to love antagonizing Shane, whether that is the intent or not. Shane clues her in to the fact that they both share blame and that he is going to be leaving. Andrea overhears this and tells Shane that she’ll be going with him. Shane, Carl and Rick stay behind to look for Sophia while the others go on. Lori stands up for Rick within the second group, challenging them to lead and insisting that they recognize the strain on him and appreciate how hard he is trying to do right by them.  Back at the church, Rick has a talk with God as best as he knows how; at turns showing confusion, hopelessness and touches of anger.

Rick, Shane and Carl share a moment as what sounds like a walker turns out to be a young buck walking through the woods. Carl slowly approaches the deer and the small group is
amazed by the beauty and simplicity still left in the world… until Carl gets shot. Rick runs to Carl as Shane takes a tactical position in front of them with shotgun raised. Fade to black. 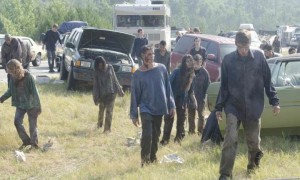 Phew. A good start to the season, at 90 minutes long it felt fairly brisk though I think Rick’s two monologues could have used some better dialogue or even brevity. We have a knife through the brain, a screwdriver through the eye-socket, a bow through the head, two rocks to the head, a cleaver, a machete and a hatchet to the zombies. The good guys took a sliced arm and rifle shot to the gut. Carl getting shot appears to now reconnect the series to the graphic novel as the previews of next week show Rick taking Carl to Herschel’s ranch, an important segment of the early comics. Welcome back and look for the next The Walking Dead recap soon after next Sunday.

For a little fun, check out every zombie death from season one in less than two minutes.