I’ve been waiting for this for quite awhile. Since 97-98 when I bought my first DVD player and in truth as far back as the early 90s when I could find no VHS copy to replace my taped off the television version.  Some of this is ground I’ve already covered in previous Treasure Island posts. The wonderful extended cast which includes Oliver Reed as Billy Bones, Christopher Lee as Blind Pew, Christian Bale as Jim Hawkins, Julian Glover as Dr. Livesey and Pete Postlethwaite as George Merry.  I recognized some other faces on this new viewing. Isla Blair, Jim’s mother is actually Julian Glover’s wife in the real world, and also played the part of his wife in Indiana Jones and the Last Crusade.  The final “new” familiar face I spotted was the character of Redruth. Redruth is played by James Cosmo who I now remember most as the father of Hamish, Mel Gibson’s best friend, in Braveheart.

I watched this film on an up-converting 1080p Blu-ray player on a 62″ Samsung 1080p DLP.  As the film rolls in the wonderful music composed by Paddy Maloney and 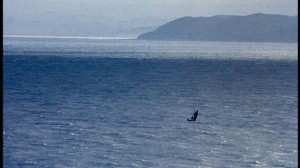 performed by the group he was part of, The Chieftains, returns me to a time when a 10 year old boy first watched one of his favorite childhood books come to life on television. [amazon_link id=”B000003G1E” target=”_blank” ]The Treasure Island score[/amazon_link] by The Chieftains is some of my favorite film music of all time (as I’ve covered before) and it has been easier to find over the years than the film itself.  Again, Hopefully at some point a full score will be released, but I don’t hold out hope after experiencing this DVD (more on that later).

After the music nostalgia washes away the condition of the film brings me back to reality.  The dirt and grain is overwhelming in the opening shots against the pale grey sea.  I was concerned, but luckily the picture settles, helped much by the low lighting of much of the film. Despite this opening scene and a few others throughout, the overall quality of the picture was better than I thought it would be.  Of course, watching old VHS copies and pirated, interlaced Laserdisc converted into DVD formats, this is a huge upgrade.  Through

most of my viewing their was a fair color range and proper amount of grain given that this was a shot for television film that has been mostly neglected over the last 20 years.

As the film, again, was shot for television, the original aspect ratio was a 4:3 and the audio recorded in stereo.  The Treasure Island DVD presents the film in what is described as a “‘Matted’ widescreen format preserving a theatrical exhibition aspect ratio enhanced for widescreen TVs.” So, they matted the master into a widescreen version. There were never any glaring moments when the matteing was very noticeable to me; a couple of cut-off hats, but not much more.  The original stereo audio is presented in Dolby Digital 2.0.  The music remains strong and the sound in general is what you would expected from an old stereo master.

The complaints: No remastering if any seems to have occurred.  In all honesty, I had

hoped for, but not expected it to.  As I mentioned, the quality was better than I expected and quite a good notch above the best bootlegs floating around out there. It is fairly obvious that not a lot of love was put into the release apart from the director commentary (more on that below).  The packaging and DVD is decidely bare-bones. The case itself is a “patent pending” eco-box case that although it is environmentally friendly, seems very flimsy. The insert is simple and printed on very thin stock. They missed a pretty glaring, to me, misprint on the back of the DVD, listing Bale’s character as Jim “Dawkins”. Also a loss of audio and glaring cut happened for me at the point I assume was the layer-change. Regardless of any errors I am extremely happy to finally have this film, one of my favorites from childhood, in a digital format.

The love that is present for the film and the source material comes in the form of the commentary from Director, Writer and Producer Fraser C. Heston. Though Heston’s commentary doesn’t have the “off-the-cuff” feel that I enjoy most of film commentaries, his knowledge and stories more than make up for that. There are many connections to

Fraser’s father Charlton who of course takes the lead role.  Julian Glover and many of the other cast members had previously worked with him and were friends.

We learn things such as, the opening village is not a set, but an authentic period village.  Christian Bale came to the film fresh off of Empire of the Sun and went on to become good friends with Charlton, running lines and spending time together.  Fraser recounts his love for the book and previous film incarnations, but the need to get away from the “jolly pirate” portrayal of Disney and become more realistic and gritty.

Fraser pays proper respect to the Paddy Maloney score.  He speaks of the use of penny whistles, uilleann pipes, fiddle and even a didgeridoo in contrast to the expected orchestra.  These nuggets of wisdom, including the explanation of brief stock footage used from Mutiny on the Bounty, are excellent for film buffs like myself. Above all Fraser speaks lovingly of his father and his work.  For my money, this is actually one of his best performances, he inhabits the character on the page perfectly.

TNT and Turner’s adaptation of [amazon_link id=”B0057FGCR8″ target=”_blank” ]Treasure Island[/amazon_link] remains the most faithful to the book of any version produced. The story is brought fully to life with an wonderful cast, beautiful cinematography and a perfect musical score. Highly recommended; and you can buy it now… finallly! 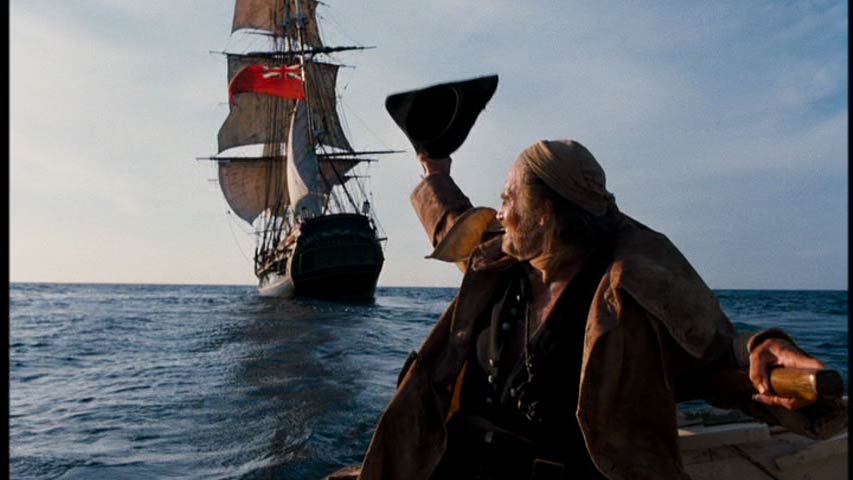