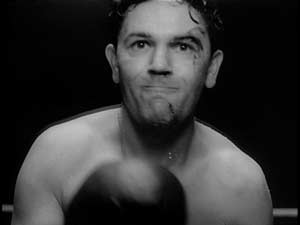 comes with fame. The film was written by Abraham Polonsky who would later go on to begin a directing career with 1948’s Forces of Evil only to have his career derailed by Hollywood Blacklisting. The film’s director, Robert Rossen is most known for co-writing, producing and directing the Paul Newman film, The Hustler, and also for naming names to the HUAC (House Unamerican Activities Committee).

Rossen, Polonsky, star John Garfield and several others involved with the film all had run-ins with the HUAC.  Rossen gave in. Polonsky did not, nor did Garfield which led to their blacklisting.  In particular it was said to have an impact on Garfield’s already chronic health, leading to his death in May of 1952 at only 39 years of age.

In Body and Soul, John Garfield stars as the young boxer Charley and Lilli Palmer plays his love interest Peg Born.  Our story begins on a lone heavy bag in an outdoor ring.  The sun is low and the shadows stretch dramatically  away from the the deserted boxing stage. The camera slowly pans towards our main character, troubled by dreams, calling the name “Ben”.  In moments he is up, tearing away from the scene.  A perfect setup to tell the story of our tormented lead.

The main portion of the film is told through the Film Noir standby of the flashback. Here, the flashback is one long cut bridging our opening moment, telling the story that leads up to it, and then finishing on the same night. Charley has made a name for himself as an 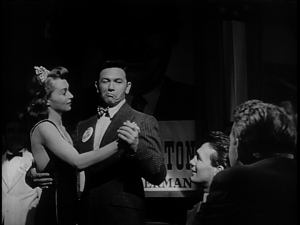 amateur boxing champion.  At a celebration dinner, he meets and dances with Peg and falls for her right away.

Peg (a painter) and Charley’s parents are pushing for him to go to college and get an education.  Charley’s constant companion, Shorty, wants to be his manager and get him to go pro in the fight game.  The problem comes in the form of Quinn, the local bookmaker, who is the “in” into the ring.  Charley’s mother is particularly insistent that he stay away from fighting and the shady characters like Quinn.  When his father is tragically killed and his mother has to resort to borrowing from charities, Charley breaks and enters the professional circuit.

Our Charley Davis is really good and he raises through the ranks quickly.  It’s not long before he meets up with the king of sleaze known as, Roberts.  Picture Roberts as this films Don King. The part reminded me of Darrin McGavin in The Natural, slimy to the core.  Roberts is Charley’s ticket to the title, through a fight with the already ailing (and Roberts knows this) champ, Ben Chaplin.  By this point Charley is all about money.  As his need for cash increases his morals decrease. He gets involved with the gold-digging Alice at the expense of his relationship with Peg.

Things continue to spiral until Charley is actually agreeing to take a dive.  Former champion, Ben, who is now a training partner of Charley takes this news badly.  Under threat and stress,  and the effects of brain trauma, Ben dies, bringing us back to the start of the film.  What does Charley do now?  Does he take the money and the fall, or does he stand up and fight?  I’m not going to spoil this one for you, this film is well worth watching.

The Art of Film Noir

The opening scene is classic piece of Noir cinematography work from James Wong Howe, a Chinese American who had 120+ films under his belt and was a 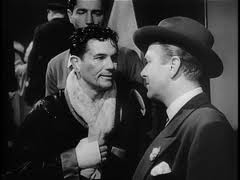 pioneer and early adopter of deep-focus techniques (all planes remain in focus). This opening plays heavy on the light and shadows with an  feeling of unease and foreboding.  The setup is off kilter and unsure, just as our main character is feeling.

The other key here is the quality editing from Francis D. Lyon and Robert Parrish, who received Academy Award nominations for their work on this film.  The fight scenes throughout the film were lauded for the realism (though the techniques are dated now) and choreography.  The editing is superb; it’s easy to see why this film had such a big influence on Raging Bull.

Body and Soul is classic Film Noir with brilliant cinematography, editing and great performances all around.  Garfield is especially strong here, it’s a shame his career was cut so short.  I would definitely recommend this film. Its a Noir, a boxing film, and moreover a morality tale on the dangers lurking behind fame and fortune. I’ll leave you with Charley’s last words in the film, “Everybody dies.”