This is the continuing story of The Courier, a Fallout New Vegas story following a wasteland wanderer seeking those who shot him and left him for dead.

Cry Me a River

I entered the abandoned gas station on the outskirts of Goodsprings and found Ringo there. He seemed to think I didn’t have any idea what was going on and asked me to play cards. He eventually opened up and told me he was member of the Crimson River 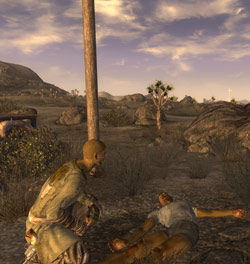 Company and was on the run from Cobb’s splinter group of the Blue Powder Gang and that they were coming for him soon. He cried for help, but he wasting his time. I would have helped Goodsprings defend itself anyway.

I knew what had to be done. I went to Sunny first, she agreed to help me take on Cobb and his buddies without hesitation, she’s a good one. Trudy and the other town members agreed to help soon after. The shopkeeper was the only one who didn’t participate, in his naivety he believed that Cobb would never make good on his threats. I guess my skills of persuasion aren’t so great, and I wasn’t about to waste time arguing with him.

The sun was high as the gang approached and the townsfolk hid in the alley between the general store and the saloon. Everyone knew it would come down to me and Cobb. I fired the fist shot and all hell broke loose. Soon it was just me and him, and it felt like that Big Iron song I keep hearing on New Vegas Radio. I felt a sting and then warmth. My left arm 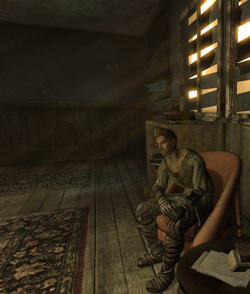 was nearly useless, yet I tried to steady my single-shot shotgun with it anyway as Cobb advanced. I pulled the trigger.

As the dust settled it was clear this fight was over. Cobb was gone, my final shot sealing the deal. Looking around I was relieved to see all the townsfolk alive and well. Their cheers almost make me forget the pain in my arm. I’m resting now after getting patched up by Doc. Ringo didn’t seem as appreciative as I would have expected, but this was for Goodsprings, not him. In the morning I will head out to pick up the trail of the rest of the Blue Powder Gang, and the man in the suit.