Gun Crazy (originally called Deadly is the Female) is a 1950 Film-Noir from director Joseph H. Lewis and writer MacKinlay Kantor who wrote the screenplay based on his original work.  An interesting side-note, Millard Kaufman received a co-credit as screenwriter.  Kaufman was creator of Mr Magoo at the time and later, the popular Spencer Tracy led Film Noir, Bad Day at Black Rock. Kaufman actually had nothing to do with Gun Crazy.  Kaufman “lent” his name to Dalton Trumbo a member of The Hollywood Ten. These were a group of film industry members who refused to participate in the House Un-American Activities Committee hunt for “Communist” influence in the film business. Check the link for more information.

That Kid is Gun Crazy

John Dall, best known for his work in Hitchcock’s The Rope, plays Bart Tare.  The film opens on a young Bart breaking into a store in order to retrieve a gun.  The mood lighting, scene staging and dramatic movements suggest to us many of the classic traits of German Expressionism that lent themselves to the Film Noir genre.  We transition into a courthouse where Bart sits alone in front of a window as the story and dialogue take place in foreground.  This seems to suggest the boy’s strange detachment from what is real, what is happening due to his mania, he is “Gun Crazy”.  This sets the stage for his poor choices for his love of things “wrong”, though there is no overt statement against firearms in the film.

She’s a Devil in Disguise

After heading off to reform school we fast forward several years and Bart is back in town, 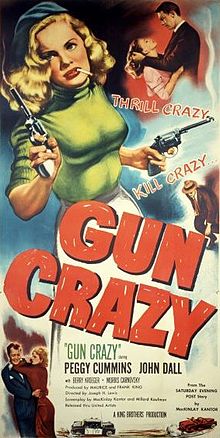 meeting up with old friends and attending a circus show. Here enters our femme fatale, Annie Laurie Starr, played by the very cute british actress Peggy Cummins.  She’s very convincing as an American, I wasn’t even aware she was from the U.K. until researching the film. Annie is a shooting star, the main attraction of the circus with trick-shooting.  A challenge to the audience leads to Bart and Annie facing off.  Their pseudo-duel is really a courting dance a sort of Gun Crazy mating ritual and Bart for certain is smitten.

After winning the contest, Bart joins up and is immediately at odds with the creepy circus owner who “stakes his claim” on Annie.  Dialog between the owner and Annie reveals that Annie has killed before.  She and Bart leave together, immediately married and a montage featuring a whirlwind of good times ensues. Annie promises to “try very hard” to be good, and manages to do so for awhile…

A Bonnie and Clyde Pre-Cursor

It’s only a matter of time before Annie’s penchant for doing the wrong thing and sort her gun crazy mania pulls Bart right along.  The bulk of the film is devoted to their crime spree and lifestyle.  I won’t spoil it here, but much like Bonnie and Clyde the journey of the characters seems to be careening towards an inevitable end.

The Innovation of Gun Crazy

Gun Crazy is touted for it’s innovative documentary-style filming.  While the film doesn’t stand up as well as many of the other Film Noirs of the period, the performance in my opinion weren’t as strong as the leaders of the genre, there are a few reasons to pay attention to the film.  This documentary-style tag is perhaps best on display in the famous 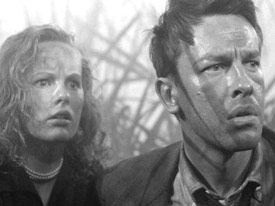 driving sequence of the film.  We the viewer and the camera sit in the back of the car as Bart and Annie discuss, and drive to their big “final” heist.  This is a continuous “1-shot” scene that does not occur on a sound stage.  We follow them all the way to their destination, park outside and leave with them after the deed is done.  Single continuously shot scenes are a badge of honor in modern filming and Gun Crazy was one of the first (preceded by The Killers the year before).

The best scene for me was at the very end of the film, where our gun crazy lovers awaken in a swamp.  The mist and fog swirl and hide the approaching lawmen, whom we can only hear.  The tenseness mounts, enhanced by the mood and lighting of the set.  The end reprises the main musical theme which is consistently featured throughout the picture and serves the film well.  Gun Crazy may not be the best of the Film Noirs but it has a few stand-out scenes that make it worth watching once.
[amazon_enhanced asin=”B000244F2S” /] [amazon_enhanced asin=”B000244EWY” /]