Tell it to the Frogs

First I wanted to briefly talk about Episode 2 “Guts”. I was busy and it got too late to do a recap. I noticed a lot people being down on the show for “pacing” and such after the second episode. I’m not sure what people are expecting from the series, particularly viewers who aren’t familiar with the comic books or collected graphic novels. This isn’t going to be all zombie action all the time. This is a character study, a glimpse into interaction of people thrown into an extraordinary circumstance and how they must survive and how they deal with each other. Don’t worry there are plenty of high-action segments of this story to be told. I think that people saw the first episode with a lot of movement, i.e. Rick out of the hospital and covering a lot of ground to Atlanta. Whereas the second episode focuses on being stuck and showed only two locations.

No Man Left Behind

Michael Rooker is a good actor who has starred in some awful movies and some decent ones too. His characters are usually memorable regardless of the quality of the overall product. If you doubted his acting chops, in my opinion, the opening sequence should put that doubt to rest. His rambling, delusional talk with himself gives you the history of his character, wrongs done to and perpetrated by “Merle”. He is at once defiant of authority, in fear of it, scared of nothing and terrified by the zombies behind the chained door. Really nice work there.

At the camp, the “family” of Shane, Laurie and Carl are interacting. Shane is going to take the boy out and learn to catch some frogs. The approaching noise of Glenn and the stolen Mustang briefly scare the campground. After Glenn is admonished for the noise, the rest of the group show up. Andrea, Morales and the rest reunite with their families and Rick is the last out of the truck. His face says it all. Andrew Lincoln has show to be a wonderful actor in this series so far. His reunion with his family and the emotions that come with that are shown on his face and they feel genuine. Meanwhile, Laurie is realizing the full impact of what she and Shane have done as Shane looks on… reunited and it feels so…. awkward.

The alarm is raised when the children find a walker feeding on a deer in the woods. The deer is riddled with arrows as the zombie gorges. The group goes in for the finish, pummeling the undead business man. Walter, played by character actor Jeffrey DeMunn lops off said zombies head with a wood-axe. That’s when Merle’s brother Darryl returns (they were his arrows) and finishes the still alive zombie with an arrow through the eye.

Shortly thereafter he gets filled in on the whereabouts of his brother and let’s say he doesn’t take it so well. After Rick and Shane relieve him of his knife and Shane lays on a nice choke hold, Rick informs them he’s going back for Merle. There’s a lot of protesting of this, particularly from Laurie and Shane. In the end Rick convinces them it’s for the good of things based on some key points. The first thing being that it’s basically us vs them; they need to value all human life and leave no one behind. The second point being that there is the large duffel bag of weapons and ammo that Rick lost near the tank. And, the third item, and most important to Rick was the fact that the same bag holds the only communication with the father and son from the first episode, who may be heading to Atlanta and the clutches of the walkers. 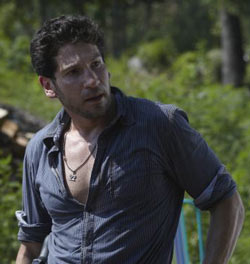 Laurie does a wonderful job of exacerbating the whole love triangle fiasco by telling Shane he can’t spend time with Carl anymore and to stay away from them. What they did was wrong in the sense of not letting enough time pass, but of course the show presents the moral dilemma to you the viewer. What are the rules, what are the emotions, What is standard operating procedure given the circumstances these people find themselves in?

Shane vents his emotion on the piece of crap Ed who beats his wife and threatens some of the other women in the camp including Andrea. He beats the man into a mess and leaves in state of semi-mania. While this is happening the group headed for Merle makes their way up the stairs and cuts through the bolts blocking the door. A slow pan over the rising music shows a hacksaw, a hand and the empty cuffs that previously held Merle. Darryl is not happy and we fade to black. Next week Rick vs a rival group in Atlanta while walkers invade the camp which is low on protection.