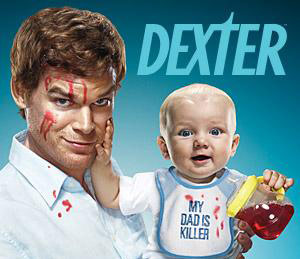 Again, sorry for mislabeling last weeks episode recap, I did the same for Boardwalk, confusing myself and readers :P.  Episode 8, Take It! opens with Dexter at a Jordan Chase seminar extolling the virtues of predatory nature and enforcing our “primal selves”.  Meanwhile LaGuerta deals with press and Santa Muerte fall-out.

Deb is bothered that she doesn’t feel remorse for killing one of the suspects.  She feels nothing.  Yasmine (the informant’s mother) comes to identitify her daughter’s body and has not problem showing her grief with Batista.

Lumen is researching the other killers and finds Cole to be dangerous.  That’s Dex’s next target.  Jordan Chase spots Dex and Cole brings him to a meeting.  Chase knows Dexter’s history and obviously wants to use Dexter’s grief, which he does do later. Owen, apparently Lumen’s ex-fiance, calls her and wants to meet.  Sounds like she took flight on the wedding day… yikes.  Dexter shows up and enlists Lumen with supply-shopping for the kill.

Lumen meets with Owen and he wants her to go “around the world” with these airline tickets he has purchased.  Wonder if he will become an issue later.

Earlier Deb refused to put blame on anyway, insisting that they remain as a unit and let no one take the fall.  Guess that made LaGuerta decided to throw Deb under the bus.  She is suspended, and assumes Batista backed the move.

Slimy Robocop arranges to bump into Lumen and get her driver’s license info.  He gives the info Quinn and asks for more money.  Quinn says no and Robocop let’s him know he’s going to be a huge problem, threatening to tell Deb about their side investigation.

Chase pulls Dexter up in front the crowd right when he should be taking Cole out. This gives Cole enough time to spot Lumen and chase her down into the hotel room.  As Cole is choking Lumen out, Dexter comes in to make the save.  Dexter takes Cole out following the code, with one slight variation.

Working with Lumen has given Dexter reason and purpose again.  He feels comfortable with her, maybe even hinting at a future.  In the ultimate show of thanks from Dexter, he gives Lumen the blood-slide from the kill.  Back at the station Batista lets Deb know that he is going to back her up any way he can.  LaGuerta and Batista are doomed!

Later, over the ocean, Lumen and Dexter “let go”.  Releasing the remnants of Cole into the ocean currents and at the same time leaving portions of their heavy burdens behind…  In the episode’s final twist, Robocop is capturing their dump through an extreme telephoto lens.  Excellent show!