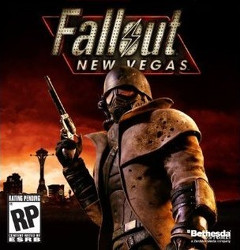 Fallout New Vegas has updated it’s voice cast with a personality that really embodies the Vegas spirit.  “Mr. Vegas” himself, Wayne Newton will provide the voice of himself as the Radio DJ pre-recorded before the big Fallout event.  I think Newton is obviously a perfect New Vegas voice casting choice and a beyond adequate replacement of Three Dog from Fallout 3. His voice could not be more well-placed than giving the introductions to songs that are from his own era and his “own” town.
Newton is just the latest and perhaps biggest addition to an already impressive cast. Some of the names you may notice are Matthew Perry of Friends Fame, Michael Dorn , Felicia Day, Danny Trejo and Kris Kristofferson. There’s also that guy from Chuck. Here’s what Gamespot had to say about the celeb cast’s roles:

Also joining the cast of the post-nuclear role-playing game is, of all people, former Friends star Matthew Perry, who will play a double-dealing gangster in his first game role. Brawny action star Danny Trejo (Heat, the forthcoming Machete), will voice the playable companion Raul the Ghoul, an ex-gunslinger and mechanic. The Guild star Felicia Day will play a bookish Brotherhood of Steel companion, and Zach Levi, the lead on NBC’s Chuck, will voice another companion from the Followers of the Apocalypse.

There are many long-time Hollywood character actors in various roles as well, such as William Sadler. You may remember Sadler from Shawshank, “The Count of Monte Crisco, by Alexander Dumb-ass” or as the leader of the bad guys in Die Hard 2. According to most of the big gaming sites, Fallout New Vegas will feature more celebrity cameos. Who they are and what roles they play (and how big) has yet to be announced. They may be waiting untill the full Fallout 4 release to reveal them. Remember, Fallout 4 Pre-Orders come with a few perks. Fallout 4 Pre-orders through Amazon feature the Tribal Raider Armor and Broad Machete. Fallout 4 Pre-order versions on console (non-collectors editions) also receive a $10 off coupon for future purchases.