OK, so the newest Facebook thing that everyone is doing isthe Top 5 lists.. a nice break from the the what color of sadness are you and what celebrity do you stalk the most quizzes. However, I have always had real problem with Top Lists. They are so arbitrary and, for me at least, never final. In games, film and music I always have things I consider my favorites, but assigning them rank, or narrowing them down to a small few is impossible for me. I could make top 10 lists by genre and probably still not be satisfied with my lists.

So with all that complaining done, I’ll present one of the games that is often found in my Top 10 games of all time list. 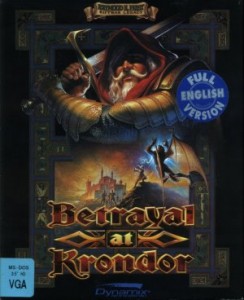 Betrayal at Krondor is a game I have purchased twice in my lifetime. Once up release on original diskettes and then again later in the 90’s for the CD version will full CD music tracks. Some of my friends know my fondness for Gaming Scores/Soundtrack, and the themes on Krondor are some of my favorites. Krondor runs perfectly on Dosbox. For those who don’t know, Dosbox almost fully emulates a DOS installation, complete with Soundblaster Pro/16 and VGA emulation. A Little tweaking and beta-running with give you Gravis Ultrasound or Roland MT-32 Emulation as well.
Krondor plays out like a fantasy novel, and indeed was based of thewritings of Raymond Feist. The game is in an RPG in pseudo-3d. The upgradeable stats include, armor-crafting (the ability to repair armor), lock picking and even barding, which allowed a character to attempt to play music once achapter at local inns for money. The combat was turn and tile-based on a flat plane. The game is fairly long at 9 chapters (this of course depends on your exploring, which should take awhile for the full experience.) Krondor is a great game and highly recommended and rated.