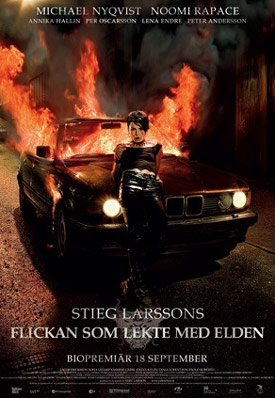 This is the sequel to The Girl With the Dragon Tattoo and the second in the Millennium trilogy. The Millennium trilogy is a series of novels from the late Swedish author Stieg Larsson. It is called a trilogy, though a 4th book is partially completed and outlines for many more novels are said to exist possibly up to what Larsson is said to have hoped reached 10 novels. The Girl Who Played with Fire continues the story of the titular character of The Girl with the Dragon Tattoo, Lisbeth Salander, played by Noomi Rapace, who is again supported by the character of Michael Blomqvist played by Swedish actor Michael Nyqvist.

The film opens up a few months after the original and finds Lisbeth returning home after traveling the world, and reconnecting with people as best as she can, which is to say, hardly at all. Blomqvist has created an edition of his Millenium paper devoted to the history of mistreatment Lisbeth has suffered at the hands of Swedish government officials, this paired with a visit by Lisbeth to her corrupt guardian Bjurman’s home sets of a whole new set of problems for both of them. This exposes conspiracy and confrontation with people from Lisbeth’s past.

I found that The Girl Who Played with Fire was not as good as the original film. I think this has to do with the fact that Michael and Lisbeth are kept separate for the entirety of the film up to its dramatic cliff-hanger of a conclusion. I missed the interesting dynamic between these completely opposite personalities. This is not say that I didn’t like the film, I did. I also thought it served as a perfect 2nd act in what will be a 3 part story concluded in The Girl Who Kicked a Hornet’s Nest. The third film has yet to receive release state-side, though it can be imported.