***UPDATED*** Check out the Mafia 2 Pre-Order / Preview. With Pre-Order difference and an link article previewing the game. 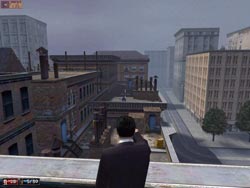 This is an update of a previous post Mafia Game Review – City of Lost Heaven, one of my favorite games. I have been prepping a Mafia 2 Preview and hope to post that shortly. You’ll notice in the original Mafia game review post I said Mafia II would be coming out at the “end of the year”; this was in 2009. It seemed like Mafia would be another victim of the now standard video game delay problem that is so wide-spread in the industry now. It will be coming out shortly and I will have a Mafia 2 Review for you as soon as possible.

Mafia 1 aka Mafia City of Lost Heaven is one of my favorite games of all time.  This is a PC game pure and simple.  I know it was on PS2 and Xbox as well, but it was a superior product on the PC.  This may change when Mafia 2 comes out as controls schemes for these types of games on consoles has improved.  Mafia 2 Pre-orders are available now at the usual places, a full preview post will be up soon.

Mafia has a rich setting and story.  You are Tommy “Tom” Morello and begin the game as a taxi driver who is simply in the wrong place at the wrong time.  After the initial taxi missions (which turned off many impatient gamers) the game really opens up as Tom begins his rise up the ranks of the Mafia.  The narrative hits on all cylinders, friendship, betrayal, morals and the “ethics” of the Mafia life.  The graphics were strong for their time, hampered only by their short draw distance.  The voice acting is top-notch, in-line with the excellently scripted dialogue.  One of the keys to games atmosphere was the authentic soundtrack.

The music was taken directly from the time-frame the game is set in.  The created music for the game fits the style of the licensed music very well, which is heavy on tracks from Django Reinhardt.  This game is directly responsible for my interest in the jazz guitarist and his music has become a mainstay on my iPod.

It’s probably not essential to play Mafia 1 since Mafia 2 takes place in a different time period.  It is essential to play the first Mafia if you want to see one of the most-complete and rich games of the last decade.  An immersive game in every sense of the word, the world feels, sounds and looks authentic to the 1920s and 1930s.  It borrows fairly liberally from many mafia movies and stories but does so in a way that pays tribute to the sources and doesn’t detract from the quality of the game.

Enter the codes while in-game. The screen will flash when entered correctly.