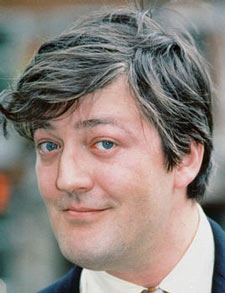 Hey everyone, a few bits of movie news worth more than a tweet or Facebook posting. First up is a article from UGO discussing the casting of Stephen Fry as Sherlock Holmes’ older, smarter brother Mycroft. He joins the newly added Noomi Rapace, of Girl with the Dragon Tattoo fame to strengthen the cast further. I’m a big fan of Stephen Fry as a comedian, actor and writer. He’s also a blogger these days, and it’s well worth checking out. I think this is a great bit of casting. I actually enjoyed the first Sherlock a lot more than I expected to, so I have hopes for the sequel.

Not to be outdone Noomi Rapace, Michael Nyvist of the Millenium Trilogy (The Girl Who Played with Fire), has joined the cast of the upcoming Mission Impossible IV as the villain. Comingsoon.net has the short story on Nyqvist being added to the MI4 cast. He has an good presence on screen in the the few films I have seen him in; it will be interesting to see his turn as a villain. I still maintain that it is a shame that Tom Cruise went (or was revealed to be) bat-shit crazy, as MI3 was a decent summer action flick, much better than MI2. MI2 was horrible, as much as it pains me to say that about a John Woo film, so it’s not saying much to say the third was better however.

Bill and Ted to Rock Again?

Alex Winter has confirmed that a new Bill and Ted is in development. While Keanu Reeves has not been signed at the film is in the really early stages, he has fairly recently said he would be interested in “visiting those characters again”. While the second one wasn’t all that great, I would still be really happy/amused to see some new life in the Bill and Ted franchise. And though people poke a hug amount of fun at Keanu, it is pretty obvious that he doesn’t take himself to seriously, though it may sometimes seem that way in interviews. If he’s willing to do more Bill & Ted, that should be a good indicator.