Save the Last One marked a huge turning point for Shane as he brutally sacrificed Owen to save himself and get the medicine to Carl. Now he deals with his demons as the survivors regroup and continue the search for Sophia.

As the motor home and the remaining survivors enter the farm, with the barn sitting ominously in the background, a grave is prepared for
Otis. Dale and Rick share a hug of relief over the recovery of Carl. 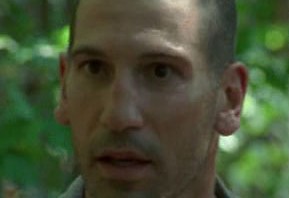 Herschel begins a funeral service for Otis and then asks Shane to speak. He does so, with great reluctance, as visions of poor Otis being ravaged by walkers play in his head and on our screens.  As Shane stutters with his speech we know his internal struggle, ever-present in his wild eyes. Cue creepy-ass theme music.

The search for Sophia will begin again, but with Daryl by himself due to the weakness and injury of others. Not only does Herschel not want any gun training, he wants weapons confiscated; later we figure out he doesn’t want them to stay for long either. What is Herschel “protecting” his people from?… answers lie in the barn not far off in the distance. Of course, after essentially telling them to leave, he later lectures Rick on God.

Maggie is their “go to town girl” and Glenn is her counterpart. They are headed to the pharmacy for more supplies. Andrea is complaining about weapons again. Shane teaches her how to unload and clean them. Daryl heads out on search.  Lori has a special item request for Glenn which she describes on paper. Glenn is awesomely awkward in his interest for Maggie and also in his “feminine hygiene” quest. 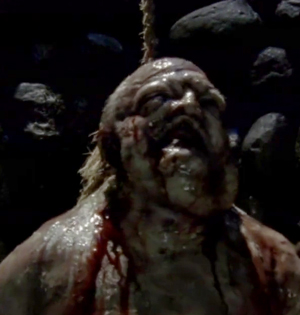 Dale is a good guy. He chats with T-Dog as they pump from the cattle well. Dale discovers a nasty surprise in the shape of the cellar-dweller from Evil Dead 2 hanging out in the well water. “Come to Henrietta!”. This ends up being possibly the most contrived scare to gore combo the show has ever seen. It looked cool but it was very forced and feels even more so as I attempted several times to describe the scene here. To sum up, they put Glenn in the well as live bait, which of course “goes wrong”. Then they try to pull up the bloated animated corpse which also “goes wrong” as the corpse is rended in two.

Daryl discovers a home on his search. It appears that someone has been there.  They’ve slept recently in a cupboard and eaten canned foods.  On this property Daryl finds a flower, a Cherokee Rose, which he gives to Carol. The rose has ancient Native American ties and symbolizes the return of children. As another friend said to me, Daryl is a real love/hate character. People hated that he was made up for the show and that he was a scumbag redneck.  But then he’s a bad-ass with a crossbow and has these moments of real humanity and warmth. He’s the most interesting deviation from the source material.

Shane takes Andrea out near the woods to shoot. He talks about taking a life, under the guise of police experience, but obviously he is talking about Otis. This man is caught up in his own damaged psyche and everyone is seeing something different from him. Andrea gets the “dealing with choices speech”. Lori gets the “do you really want me to be here, I’ll do what you need” talk. It’s a long, slow burn towards a catastrophic explosion, folks.

The biggest action of this episode is the action that Glenn gets with Maggie. After finding Lori’s special package, which is, of course, a pregnancy test (Loris sneaks off later to confirm that, yes, she is indeed pregnant), Maggie comes back.  Glenn covers it up by holding a box of… condoms?  This leads to some amusing dialogue, which turns into some tenderness between two lonely, lost people. Way to go Glenn.

There have been complaints about the quality and pacing of the show this season despite it’s record breaking premiere numbers. I can see where people are concerned.  The difficulty is, as I have mentioned before, this isn’t just a Zombie show.  This is a story about survival, humanity and multiple character studies.  To get more out of our characters, we have to understand them better. To retain a horror audience the show needs to have gore and scares. These two contrasting factors produce uneven episodes like this that people complain about.  On the whole I will admit it was weak, probably more for the “well walker” sequence than anything.  But it’s a setup, and if the previews of next week are any indication, this was the proverbial calm before the storm.