Just Finished my Platinum run-through of L.A.Noire and I’m waiting for all of the DLC to
download.  Either my connection is bad tonight, which is quite possible, or the Playstation Store is again getting slammed after re-opening late last night. While perusing the usual news, information, gaming and media sites, I discovered today’s press release regarding Uncharted 3 (the things you miss while at work!). Uncharted 1 and 2 are the only other games I’ve achieved platinum on outside of Noire a testament to my immense enjoyment of the series.

Not only announced are the now industry standard pre-order bonuses for Uncharted 3, but they are officially producing an Uncharted 3 Collector’s Edition at a $99.99 price point and it’s full of great stuff. The Nathan Drake statue (left) modeled directly from the game, featuring Nathan’s desert costume and gear looks great. We’ll have to wait for an un-packaging or an in-depth product description to get sizing for this thing, but it appears to be fairly close to the height of what is described as a functioning travel treasure chest, pictured further below.  The treasure chest will hold all of the goodies inside, including the game.  This looks like a really good display piece for collectors.

The actual game itself comes in a steelbook.  Steelbooks are durable, usually have great 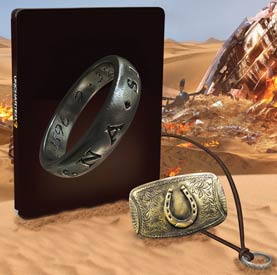 artwork and are often offered in limited or collector’s editions of games outside of the United States (they also do this a lot for special Blurays and DVDs).  It’s nice to see a steelbook edition hitting the States. The next item is a replica belt-buckle styled directly after the one that Drake wears in the game and can be seen on the statue as well.  But that’s not all for the aspiring Drake-wannabe.  You can aid your costume quest with a replica of Nathan’s necklace which holds the ring of his ancestor Sir Francis Drake.  This is a really cool touch. You can see all this great stuff in the image to the right.

Currently retailers only have the standard Uncharted 3: Drake’s Deception Pre-order

up. The game, for right now, is listed at the standard $59.99 price point for console games.  Depending on where you pre-order there are various bonuses according to the official posting on the Playstation Blog .  The pre-order bonuses all pertain to boosters for the Multi-player component of the game. Multi-player in Uncharted 2 was unexpected, in that a strong single-player game like the first didn’t really feel like it needed that, and secondly that it actually worked really well. Uncharted 2 Multi-player kept the fun going long-after the single player campaign (and multiple play-throughs of it at that) were finished. I’ll update when the Uncharted 3 Collector’s Edition Pre-order goes live, which should be in the next few days. More news coming soon with the multi-player beta scheduled for the end of this month.

is now available without details from Amazon.

Why You Need the Uncharted 3 Strategy Guide