Last weeks Dexter episode left us with a ton of drama. Brother Sam is shot, Travis was released by Dex and is having second thoughts and Quinn most likely completely destroyed a case by sleeping with a material witness. 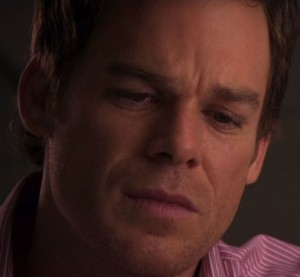 Masuka and Batista give Lt. Deb the cold shoulder. LaGuerta is on her ass about the Doomsday killers. LaGuerta isn’t even interesting as a character anymore. Dex visits Brother Sam at the hospital and vows to let his Dark Passenger bring him justice. Later while at a candelight vigil at the shop, he tries to convince Nick to give up his old crew. Sam’s dog is trying to tell us and Dexter something, just not sure what… could Nick have possibly been involved?

Batista and Quinn explain Gellar’s paper, believing Revelations to be a sort of 7-step program to creating the Apocalypse. These tenants he created are what got him kicked out of the university.  Quinn recognizes the tattoos on the “test” victim in old photos as Professor Porter, the woman Quinn slept with and Gellar’s former T.A. Quinn tries to force Batista into keeping it from Deb.

Travis prepares a brand to mark the “whore of Babylon”. But will have find “strength” 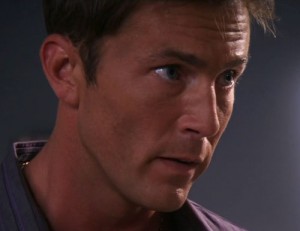 enough to do it as Gellar and God demand of him? Batista plays Deb to try and go see Porter, but Deb tells him to bring her in, thus destroying Quinn’s ruse.  Quinn is screwed and deservedly so. Batista is going to “handle her”, but what the hell can he do?

Dex stalks the the gang. Jamie is packing Deb’s stuff, she shows interest in Dexter again. Don’t know if they take that anywhere.

Dexter is losing it, can’t admit to himself that he cares about someone that is not his immediate family. Dex talks with Harry about seeing the good within himself. Dex is tasting a small portion of redemption again. Deb is struggling as well. It comes out during what should be a final meeting with the precinct psychologist. Deb feels out of place, she can’t interact with people like she used to. Shrink tells Deb to relax and to stop suppressing things. She tells Deb she should go along with her housewarming party idea. 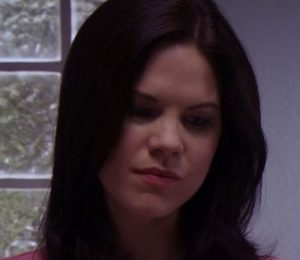 Dexter returns to stalking the Locos crew, Leo specifically. Mike is doing some detective work of his own when he spots some crack-heads. He hits up the junkie for some Locos information. He “flamingos”  the guy to get Leo’s name, this will conflict with Dexter’s dark revenge. Leo pops out for Dexter just as Mike shows up at the door. Leo takes on the cops with a shotgun… and he’s down. The sadness on Dexter’s face is noticeable. What does he do with the anger. It’s not over yet, it can’t be.

Mike’s sure this is the right guy. Dex notices the DVD player is running. It’s the security footage from the garage. The footage is inconclusive. Mike points to Leo. Dex feels it’s wrong and so do we. I’m pointing to Nick again, based on the dog’s recation. Dexter figures out the same thing.

Travis is putting his blood in a jar? Part of the branding? There are many jars of blood in the fridge? He grabs sandwich fixin and makes up some food for the “whore”. She begs to see her son and to be let go, but Travis doesn’t comply. Travis visits his sister who is

teaching class. Travis is a very lost soul that Gellar latched onto. He is kind and mild-mannered. It won’t end well for him though.

Dexter hits up Nick’s apartment to do some forensics work, matching a 9mm slug to the assault on Brother Sam. Dexter is barely containing his rage.  While Dexter moves, Batista questions Professor Porter. She confirms her identity in the photo. Deb realizes Quinn is not in on the questioning and tells him to get in there. This is where it begins to unravel. When the questioning gets tough, she lets it out that she slept with Quinn. She leaves, angrily. When Deb reprimands Quinn he tries to spin it as jealousy. What the fuck?!

Dexter sends Jamie with Harrison to Deb’s housewarming. He’s about to go after Nick, when he gets the call that Sam is awake. He is going to die. Sam doesn’t want revenge. Even as he is dying, he has a message for Nick, that he forgives him. He only trusts Dexter to deliver this message. This is a major challenge for Dexter. He knows about Dexter’s darkness but he sees his light in him as well. This was a touching scene.

Quinn shows up to Debra’s completely waste.. Masuka’s intern questions Jamie about Dexter. Intern is flirting with Jamie, she shows interest, until Quinn gets in her face. Batista punches Quinn when he won’t stop talking about Jamie. He is an amazing douchebag, no matter what happened to him with Deb. They try to soften things, by Quinn asking Deb is she ever loved him.

Gellar expects the marking to be done, while he “furthers preparations”. Travis grabs the

brand and approaches the victim. Will he? Won’t? He let’s her go! Brother Sam is gone and Dexter struggles with the idea of proposing forgiveness to Nick per Sam’s request. Harry tries to make sure Dexter does the right thing. But when Nick shows up, he invites him for a ride. Deb calls for Dexter, she needs help… guidance and eyes the card of the psychologist.

Nick killed Sam to get back into the gang. He delivers Sam’s message. Dexter is doing the right thing, until Nick starts to laugh about the situation. So Dexter performs another baptism. “There’s no light in me.” Woah, Ice-truck killer brother shows up, is this his new guide, has Harry, the voice of reason been pushed aside for this darker manifestation? The only thing more disturbing than this ending are the scenes for next week.