September 16, 2012 saw the return of Boardwalk Empire to HBO and we begin with a montage of all the events that got us to this point. The Commodore and Jimmy moving against Nucky. Commodore’s stroke. Van Alden’s child with Lucy and his eventual run from the law. Jimmy’s incest. Margaret’s affair and her turning over of the valuable land 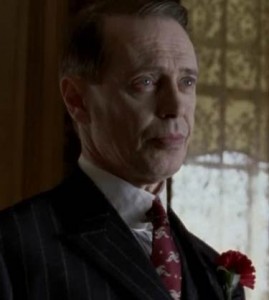 deeds to the church. Angie’s (Jimmy’s wife) murder by Manny. Jimmy murdering his father. And then, in the final moments of the season, the reminder that you can’t be half a gangster, as Nucky shoots Jimmy. Phew. Welcome to season 3.

Right away get our first look at new character Gyp Rosetti, played by a really good actor named Bobby Canavale who I first remember from The Station Agent with Peter Dinklage. Rosetti is a maniac, rivaling even Capone. He murders an innocent bystander that offers help for a broken down car for disrespecting him.

We also very quickly get see that Nucky is indeed “full-on gangster” as he lightly interrogates and then orders the murder of a liquor thief. It’s good to see that the slimy Doyle is still a complete idiot.

Meanwhile in Chicago, Torrio and his boy Capone meet at the bar. Al has agreed to turn over a leaf and quit with the temper. This is quickly tested when Irish mobster Dean O’Bannion comes to haggle over territory encroaches. He insults Al and makes fun of his children. Torrio begs for Capones patience while he’s out of town. Al promises to make good for the New Year. Bad news for Dean-O as the New Year doesn’t start until tomorrow.

Agent Van “Creepy” Alden also seems to be in the Chicago area after shooting an FBI agent
in the foot and making a run for it at the end of season two. He is now trying his hand as a 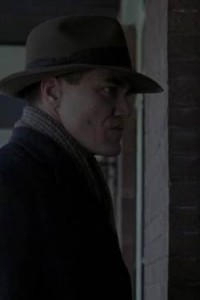 door-to-door salesman, hoping to win a company contest and change his luck, providing for his son and “wife” the nanny. Lucy is long gone it seems.

Poor Richard Harrow without his friend Jimmy has now taken up residence at the Commodore’s old pad. There is he serves a protector for all the women there, now part of Jillian’s (Jimmy’s Incest Mom) house of ill-repute. He also shares the care-taking of Jimmy’s son. Jillian is trying to convince the boy that she is his mother. Harrow instead tries to teach him about his real mom Angie.  Jillian subtly let’s Richard know she doesn’t appreciate it and that he should cool it if he “likes living here”.

While touring the new hospital, part of the land deeded to the church by Margaret last season, a woman comes in apparently in the middle of a miscarriage. A young doctor warns Margaret that this could have been prevented with education and a new thing call “prenatal care”, but that he doesn’t expect a rich namesake like herself, on the board of trustees, to do anything about it. This comes into play later when she confronts the head doctor at a New Year’s party and Nucky takes exception to it.

Back in Chicago, Capone arrives at O’Bannions flower shop to off the man that slighted him and his son. This will cause a war between the factions. Just then a desperate salesmen stumbles in on the scene. Oh dear, it’s the truly unlucky Van Alden. He somehow makes the best of it, with O’Bannion making him out to be a touch guy with a bunch of firepower in his briefcase (actually full of irons). Capone leaves. 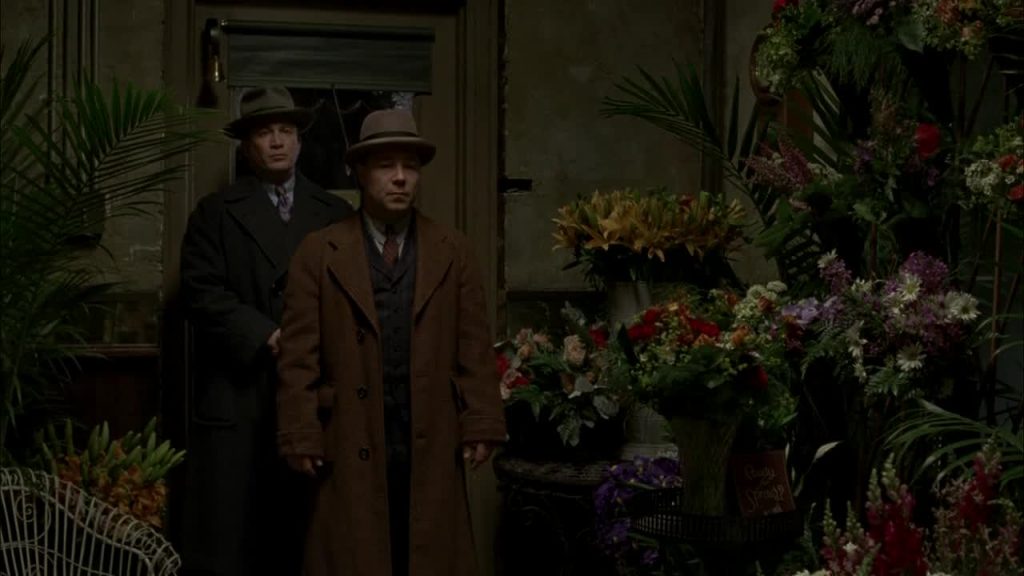 Dean-O offers to buy 24 irons from van Creepy and give him free flowers for the wife. This is great for him as it will allow him to win the sales contest and buy a home for the new family. He also offers the former federal agent “real work” in the future. It looks like that may come to pass as he is screwed out of the contest win back at work.

At the Egyptian-themed New Year’s party, Owen shows that he still has interest in Margaret after their brief affair. Nucky shows interest in a flapper-girl that performs for the party. Later post-party Nucky chews Margaret out for accosting the doctor. Turns out this is another area where Nucky has gone full-on bad. He berates Margaret over the land deal and then turns to the bed of Cleopatra aka Ms. Kent the flapper girl. It is revealed he has been seeing her for quite sometime. Is there anything left to like about Nucky? it appears not to me. Kinda sad. 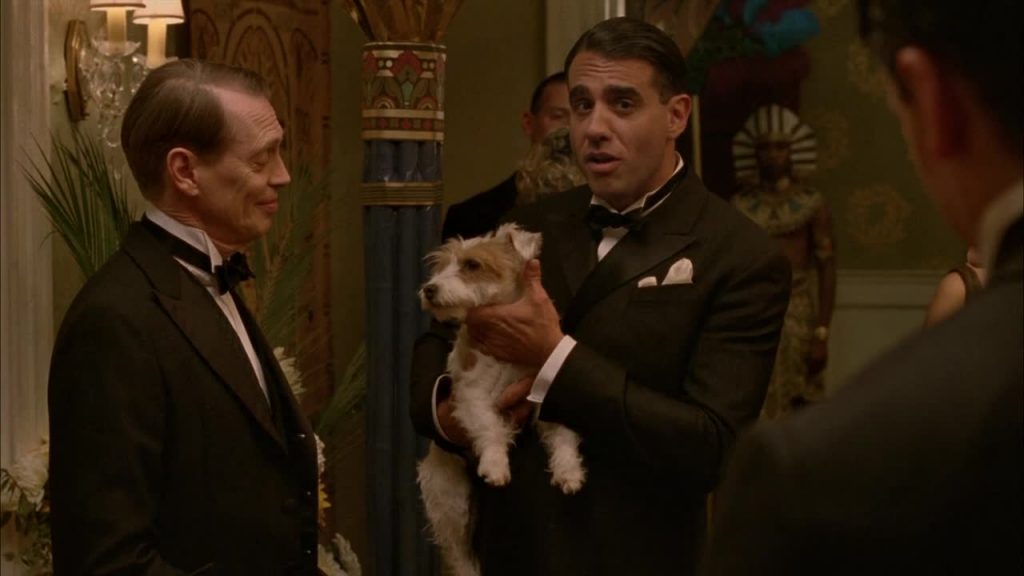 While the party is happening, on the other side of town Manny shares a quiet New Years with his wife before he has to leave. Earlier he agreed to take out the getaway driver from the liquor heist in exchange for a “still of his own” so he didn’t have to share with Doyle. He goes to answer the door for his ride, and instead is met with a Harrow shotgun to the face. Guess Manny shouldn’t have messed with Angie, eh?

While Manny is meeting his maker Nucky meets with Rosetti, Rothstein and extended crew. Much to Gyp’s chagrin (and Luciano’s as well) he says he will only supply to one

person now and that is Mr. Arnold Rothstein. Rosetti, already feeling slighted for being interrupted and having his cheek pinched by Nuck at the party, goes ballistic; raving before saying, “none of you guys can take a joke.” This is the same thing he sad to the poor man at the beginning of the episode before he bashed his face in.

Quite a start here. Manny’s got shotgun. Rothstein gets the booze. Jillian’s a whore (no for reals this time). Margaret is still conflicted. Doyle’s still an idiot. Jimmy is still dead. Nucky is definitely “full-on gangster, and it looks like Rosetti is coming for him. And all in the season 3 Boardwalk Empire premiere.