Our latest episode open with Nucky in his office. He is having trouble dialing a number; attempting to reach Ms. Kent. The operator speaks strangely to him. A young boy stands in 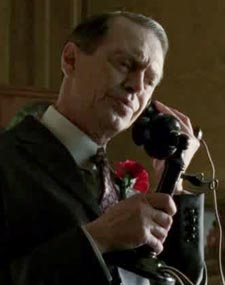 front of Nucky. Nucky holds a frying pan with bacon, which somehow morphs into a gun and shoots the boy in the face. Nucky frantically checks on the boy as he is awoken from his dream that is not shy about its meanings.

Margaret is one confusing lady. Almost always at odds with her own stances against things that Nucky does. She calls him at his office bed to remind him of a meeting with the bishop’s representative ahead of his Knighthood from the pope. He tries to decline, again, but she persists. Then she strong-arms the local bishop’s man into an meeting with Bishop himself.

Poor, sad, agent van Alden is the victim of a prank at his iron-selling work. The offer of more “interesting” work that he received when he stumbled upon Al Capone’s nemesis is looking better and better all the time.

Nucky with an escort of local law enforcement meets Gyp Rosetti at the diner. Rosetti is 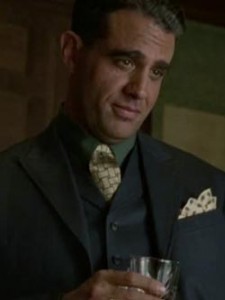 still insisting on shipments and Nucky still wants to keep things simple and clean. Some threats from Gyp don’t really move the Nuckster, but he acquiesces offering him another night in Atlantic City and a one month supply of liquor with no further deals imply. The terms are accepted for now.

Gillian, at her new operation, is making a call to have a leaking roof fixed. The receiver of this correspondence is non other than Luciano who is apparently a partner in this new endeavor. Also of note is that Jimmy is not “known” to be dead , as he holds the lease and will turn it over “when he comes back”. Luciano and his partner Lansky are meeting to discuss a heroine delivery; another of their side dalliances. Their bagman has an itchy trigger finger. What could go wrong? Lansky, the level-headed member of the duo, wants them to make an offering to Masseria, a local kingpin that the duo have had trouble with before.

Doyle attempts some new management muscle techniques by implying that he killed Manny when a buyer comes in to the warehouse. At the same time Gyp and Nuck have their meeting. Nucky declines an invite to head with Rosetti to Jillian’s place. Things are tense momentarily when it seem Rosetti is offended, again, but it ends alright. Lansky and his bagman Eddie get into a brief shoot-out at the same time, and then back towards Chicago, Agent Creepy-pants get’s some “reassurance” from his nanny-wife.

A delivery boy has a chat with Richard Harrow. Harrow finds it quite interesting that it was Mickey Doyle that shot Manny Horowitz, since it was Richey himself that delivered a shotgun payload to Manny’s face. Is this a new target for Harrow’s particular brand of justice?

Gillian and Gyp commiserate on loss and Nucky Thompson.  This may be another angle for Rosetti to attack Nucky and also provide an avenue for Jillian to get revenge over the death of Jimmy. Either way the partnership is full of crazy and bad for everyone.

At the church ceremony for Nucky, he again see the the boy he shot, singing in the choir. He become heavily tense and nervous as he is called to the altar. He looks over at the boy again, visions of a bullet-hole bleeding from his face. He is truly haunted by his actions and becomes increasingly distracted. While he should be meeting the Bishop he instead tries to call Kent. In the meantime Margaret makes the ultimate power play, referencing that the good doctor will be starting a women’s health clinic focused on pre-natal care. She get’s her way with the Bishop’s blessing.

Nucky doesn’t show for Gyp’s shipment, instead sending Owen with Eli in tow. Gyp is offended of course. He would be offended if you breathed in his direction. The bad feelings seem to compound with a message from Nucky, “Bone for tuna” a poorly translated attempt at wishing the man luck from their previous conversation.

Van Alden, attempting to fit in with the boys heads to the speakeasy. The luckiest man alive, the stauch defender of the Volstead act, even at his own expense, is then caught up in a raid. The man simply can’t catch a break. It gets worse when he may be recognized by an agent. But full-on crisis is averted when the man turns out to be a neighbor, who takes his fine payment “directly” and lets the former agent go home.

Harrow’s Justice League springs into action again, grabbing Mickey Doyle who is about to have a rendezvous, straight from his home. He takes the shaking and crying Doyle straight to Nucky. Surprisingly, Harrow admits that he killed Manny. Nucky asks why. The answer, “Angela Dormandy”. Nucky inquires about his family, and his own safety. Richard’s answer is that they are safe, Jimmy was a soldier and he lost his battle, Ang was an innocent. Nucky wonders if Richard ever thinks about the 63 people he has killed, he tells Nuck that he already knows that answer.

Gyp’s caravan is back in Tabor, that last fateful stop before New York City. When the Sheriff shows up and wishes Rosetti good luck, the “bone for tuna” line plays in the crazy man’s head and she snaps. Dousing the man with gasoline and lighting him on fire. Rosetti isn’t going anywhere and things have certainly intensified.

Nucky falls asleep in Kent’s darkened apartment and he awakes to the sound of bacon frying. She is back and the Nuckster is strangely at peace, quite a contrast the the fire of Rosetti, which is probably headed this way.

So at the end of episode three, “Bone and Tuna” we can against ask the time-honored question: How is Mickey Doyle still alive?