A double dose of Boardwalk with the also late, but not quite as late recap. Last week’s Boardwalk Empire Episode saw Lucy gave birth, Van Alden’s wife found out, Margaret confesses to her love for… Owen? The attorney general pulls support for Nucky due to pressure from Senator Edge, and Jimmy and Manny attack Nucky’s shipment but secure a side deal with Luciano and his crew…

Nucky is setting up a fight over the “wireless” and reporters are asking tough questions. Van Alden returns to Lucy, who is chain-smoking in the kitchen. His wife has gone away. Lucy wants out obviously. Nelson doesn’t have her money as was promised. Then he bails when the baby wails.

Jimmy is chatting with Luciano, Harrow and their haphazard crew. Capone is there with them.  Eli shows up to join. The are essentially talking about supplanting all the bosses, Nucky, Torio and Rothstein. They are already bickering. Eli suggests killing Nucky. Harrow already seemed opposed to that in the past so I wonder what happens. They all agree, aside from Jimmy. Then he cracks under the pressure, the giant douchebag.

The prosecutors in Nucky’s case have taken up Van Alden’s space and he’s very unhappy about this indeed. God he’s a weird dude. Van Alden stews while Margaret is taking a carriage to.. Brooklyn? It’s her family. Margaret is Peg. It’s awkward… very awkward. She eats with her family. They work hard and are poor. Margaret offers help but is turned down.

Nucky meets with his lawyer until Lucy shows up with baby. She wants money for the baby. She tells Nucky who the father is. Hmm… Van Alden can overhear the case. Nucky is 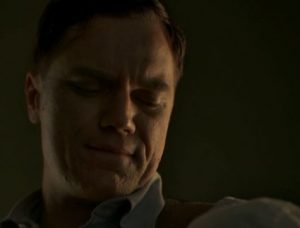 going to turn the screws on Van Alden obviously. He is in Nucky’s office a short while later and tells Lucy, “We’ll discuss this at home… dear”. I got a laugh out of that. Nucky lays out the deal to keep Van Alden’s indiscretions from becoming known and bank-rolling his mistress and brand-new daughter.

Creepy mom dresses for Jimmy. God their relationship is uncomfortable. Jimmy talks about the ordered hit on Nucky. Creepy mom counsels him to not go back on his word. He doesn’t want to do it now, but it’s late in the game.

Peg/Margaret talks to brother Eamon who makes her feel bad about missing her mother’s death and burial. She left home after she she became pregnant and faced life in a convent. She attempts to give him money, that she previously took when she left home.

Luciano is sleeping with creepy mom again, how could this end up bad? 😛 At the same time Van Alden’s wife is back and watching over the baby. Oh wait, no, it’s a neighbor that Lucy has paid to watch the baby. Lucy has gone away.

Margaret says goodbye to her much younger sister, as well as brother and his wife and child. Van Alden talks to the baby about names, settling on Abigail. He is normal, if only for a

moment. He then goes to talk to Randolph (investigating Nucky). He confesses about his daughter. He gives up his entire set of files on Nucky. He agrees to testify for her as well. She will sort out the “domestic situation” for him.

Eamon gives the money back. He doesn’t “think much of her at all”. He’s a dick and tells her to leave them alone and not come back.

Owen is missing. I think he’s pegged the shooter. Clever girl. He takes the dude out in the bathroom after a long struggle. Bludgeoning him with a spittoon and the garotting him. He’s blocked the door with bent spoon. Pure bad-ass. Damn, it wasn’t the shooter it was an opponent from back in Ireland.

Dempsey gives a speech, Nucky eyes a new dame. Bad news Nuck, bad news. Jimmy shows up. He’s talkin’ all cryptic and the shooter shows up to take Nucky out. He takes a bullet through the hand. Someone shouts out, “It’s okay, he’s alive.” And Jimmy closes his eyes, perhaps bracing for the coming retribution. While Nucky bleeds, Margaret and Slater get to business, business that will be bad for everyone involved.