Our brief recap and teaser at the top of the show clues us in that Chalky White and Nucky’s brother, the former sheriff may be making an appearance this episode. Let’s see what happens on episode two in season three of Boardwalk Empire, entitled Spaghetti and Coffee.

We start off in New York. The formerly not-so-admirable Sherrif Eli Thompson receives his release from prison and is greeted by the knucklehead Doyle. Eli wants to know, what

we all also wonder, how is Mickey Doyle the imbecile rat, still alive? Poor Eli is supposed to work for Doyle. Doing what, we don’t know yet.

Gyp Rosetti scopes out the routes in and out of Atlantic City in Tabor Heights, half-way between the two. He fishes for information from a young man at the gas station, pin-pointing that location as a major gateway as it’s the last gas before NYC. He’s searching for an angle on goods passing by.

Margaret is still disturbed over the miscarriage from the hospital. Mr Owen Slater stops by for a visit. He’s here to give Margaret her allowance from Nucky. The tension between the two is still quite obvious and given that Margaret relationship with Nucky is nearly non-existent at this point… it’s only a matter of time.

Nuckster frolics with Cleopatra, aka Ms. Kent. She receives a call and is awfully friendly with whoever is on the other line. There’s a razor in her bathroom that isn’t his?  Nucky’s 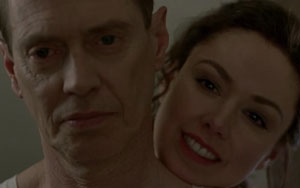 mood turns noticeably dark, before he makes his exit. This pattern repeats itself later at a night club when she talks to a young man. His jealousy ultimate leads to an important missed phone call later in the episode.

Maybelle (Chalky’s daughter) still has a suitor in the young Samuel who is studying to be a doctor. He visits asks Chalky for her hand in marriage. After a brief “examination”. He consents; too bad that Maybelle may have other ideas.

Margaret meets with the woman that had the miscarriage. Later she finds the young doctor who discussed educating patients better. The doctor is a maddening man, never pausing between barbs. Margaret dishes out her own set of verbal jabs. They just may be able to work together after all. 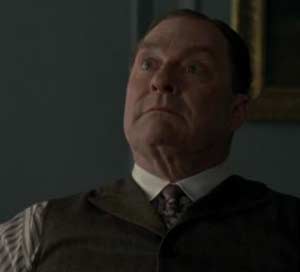 Nucky enters a room, a fish bowl on a table. In the bowl is money. Nucky is instructed to put money in the bowl as well. Some $40,000 is expected of him. When Nucky disagrees with the manner of payment, enter actor Stephen Root as Bullock Means, US Department of Justice, Special Investigator. A strange man. Nucky is attempting to distance himself via bribe from Smith and one senator Daugherty, who he is now at odds with. Nucky wants info and gets cryptic statements instead. Remus also shows up for his own donation and Bullock asks Nucky to slip out the back.

Eli and Doyle meet with the local law enforcement of Tabor. Just happens to be outside Gyp Rosetti’s temporary location and at the exact gas station that he was pumping for information earlier. This could be bad.

Chalky has a talk with Maybelle. She asks him about his marriage with her mother. She seems unsure of marrying Samuel. She says her father is so interesting and her suitor is a regular boring man. She doesn’t want that. Chalky wants a better life and choice for her 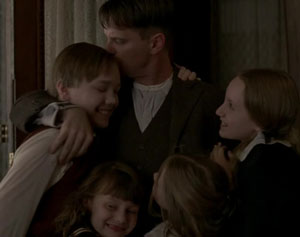 and is quite angry with her non-committal stance.

Eli goes home to his 12 million children and his wife. Eli may not be a good man, we can’t say that he was simply he was caught up with his evil brother as he did things way outside the scope of normal corruption, even murdering a man. Regardless, it is nice to see the reunion with his family. There are hints that the relationship with his eldest son may be damaged.

Gyp has spaghetti and coffee at the local diner, and gets some flack from local law enforcement, who will be paving the way for Doyle’s shipment through town later… more trouble brewing. He sarcastically mentions how this roadside eastern coastal diner’s spaghetti is just like momma’s (back in Italy).

Nucky and Rothstein talk business. Firstly the murder of Manny Horowitz. Rothstein seems disturbed that Mr. Thompson has not uncovered the perpetrator of this crime yet. Then they talk shipments, there may be a mix up in the dates. The superiority of Rothstein grates on Nucky chose to deal with him, so he can’t complain. Next they talk apartment 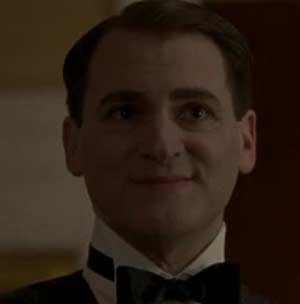 maintenance obviously on the behalf of Ms. Kent.

The Pope is giving Nucky a Knight Commander title for his “good works”. Nucky doesn’t realize this and has already attempted bow out of anything to do with the hospital. Margaret insists a proper suit is cleaned and ready for him and that he will be attending anyway whether he knows it or not.

Eli talks with his oldest son Will. He wants Will to go back to school. There is a disconnect, only natural with 2 years gone. Will became the man of the family and had to quit school and work thanks to his fathers poor choices.

Doyle oversees the loading of the shipment. Owen shows up and explains the course of action and tasks for the workers. They are stopping in Tabor Heights at the gas station… Shit is going to hit the fan soon. Owen talks to Eli.  Owen offers Eli a piece so that he can take the extra trip to New York and the $50 that comes it. A nice gesture on his part.

Maybelle has Samuel meat her at Chalky’s club. Samuel, being no fool asks her for a straight answer about the marriage proposal. When he chastises a man that continually 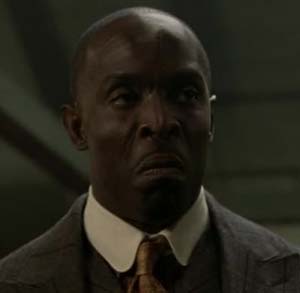 bumps into their table he gets a knife across the cheek for his troubles. Chalky’s bouncers beat the assailant to unconsciousness.  Hopefully this was enough of a taste of excitement for Maybelle. Chalky sets her straight to how “interesting he is” and how that type of life might work out for her.

Owen, Eli and crew stop at the gas station with is eerily quiet and the pumps are locked down, with no one in sight. The cops show up Rosetti follows shortly there after. It’s an ambush. Rosetti’s men step out from the shadows surrounding the group. Rather than the bloodshed you would expect from the crazy man. he simply blocks their access to the gas, thus stopping the shipment of goods to Rothstein

And Ms. Kent’s apartment, Nucky cooks and recounts his youth helping to raise his family. Nucky laughingly asks for honesty; his character is no the most dishonest on the show. What right does he have? He wants to “stay there forever”, “if he could”. She laughs. Nucky turns dark as her phone rings. He convinces her not to take this one.

The call he thinks he should be jealous of is actually coming from Owen Slater trying to fix the shipment situation. Eli and Owen weigh their options. Nucky’s jealousy cost them precious time. Doyle begrudgingly agrees to turn back to Atlantic City. Rothstein will not be happy and something will have to be done about Rosetti. 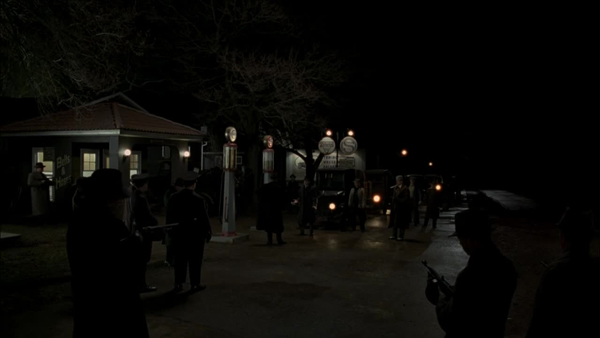