Episode three ended with the the “4 Horsemen of the Apocalypse” riding through town, one wearing the head of an unfortunate jogger, victim of the cult now dubbed the Doomsday killer. Will Quinn continue to be a problem? Hot intern has stolen evidence. New hire detective from Chicago has arrived. Lots of stuff happening. Onto…

A Horse of Different Color Recap

Dexter is attending the baptism being held by Brother Sam. Dex ponders religion vs
science. He seems to still be trying to grasp the concept of redemption. He discussed this

with Brother Sam. Dex is called away to the apocalypse crime scene, horses still roaming the middle of the street. Guess it wasn’t just his head; his parts were spread throughout the 4 horsemen. Mike (the new detective) connects this scene to passages from Revelations.

Dex and Deb discuss the case as he reconnects the body parts at the lab. He finds a number hidden inside the eyelid. They go back and check the snakes victim with apocalypse stomach stitching and there are numbers inside the intestines. The killer(s) are leaving messages, but what do they mean?

La guerta having trouble with deputy chief. He informs her that Deb will be handling the press conference, which takes the spotlight away from LaGuerta. Deb gets tips from LaGuerta on “being herself” probably more of nudge towards failure, and Mike tells her to dress nice, which she doesn’t like hearing but ends up doing anyway. The end result is Deb dressed up nice, but being herself, by cursing on live television and cutting the conference short. LaGuerta thinks she’s won based on the performance, but later the 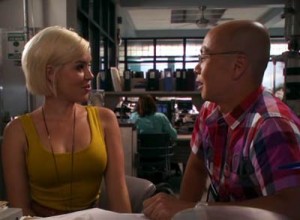 deputy chief lets us know the public is eating up Deb’s no-nonsense approach.

Hot intern girl continues to be hot and lets Vince know that she’s also a roller-derby participant. She continues to flirt with Vince, but wants their “date” to take place in the evidence room looking at more serial killer cases and evidence. Vince is getting played, but not for long. A man calls asking as to the authenticity of an ice-truck killer part up for sale on an ebay clone. He quickly figures it out and confront hot roller-derby intern. She insists is was because they were going to waste and she was short on rent. Masuka is downtrodden, though she insists she has genuine interest in him. Vince tells her to leave.

Later EJO and Travis, his follower, are having lunch at a restaurant. Trav is making headway with the cute waitress, EJO wants him to focus on the task at hand. Meanwhile Dex is taking his car to the bodyshop, again, and has a talk with Brother Sam about Revelations and how people use God to justify strange things.  Dex ends up back in the lab and figures out based on the delicate horsemen scene setup and the hack-job on the corpse that two different people are participating in this “show”.

Immediately following Deb’s botched (but not really) press conference Dexter is called to the hospital where his son’s appendix has just burst. Brother Sam graciously joins them to support Dexter. These guys are becoming legit friends though neither will admit to it when Deb questions them.  Brother Sam shares the story that essentially start his journey with a “dark passenger”, watching his father murder a man after using young Sam as a distraction. Aster and Cody are finally mentioned at the hospital, guess they do still exist!

While all rhis is going down Quinn who is still being a major asshole and Batista are smoking weed in Batista’s Trans Am. I guess it was kind of funny but it seems sort of pointless otherwise.  Not sure if this plays into anything later.  They think they have found a lead, but it’s the same one new detective Mike has found to0. A man named James Gellar, EJO’s character, who is a “Revelations Expert”.  Gellar was fired from his professor religious studies job, he is thought to have stolen an ancient sword, believed to have belonged to John the Revelator. This sword happens to possibly match forensics on the kill weapon for the Doomsday murders. 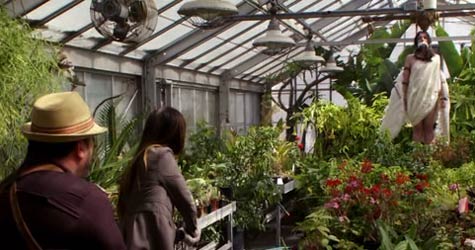 The final scenes of the show involve the elaborate death trap for Travis’s unfortunate female waitress companion.  After Travis defiled her, Gellar felt her purification fit “God’s plan”. She is hung on a cross with sharp instruments around her neck and arms.  The entering police trigger the trap which snaps her neck and lacerates her throat.  To top off the scene a plague of locusts, bibilical style is released upon the crime scene.

Have to say, not real excited about the Doomsday performances yet, but their kills are impressive. Mos Def is doing a great job. His acting is really up several notches over what I’ve seen from him before.  The musical score in this episode was especially good. The last scene is perhaps some of the creepiest music ever from this show.