Well, no not really.  It’s not for you.  Well, I guess it could be, if you wanted it to be.  But this haiku is not a monogamist.  He wants to see other people, and I am an encouraging that.

Associated Content is having a contest for Haiku poems regarding the color Purple.  No not that magical film with Oprah and Danny “I’m too old for this Shit” Glover that my mom watches once a month to get here weep on, just the color itself.  This is in celebration of their purchase by Yahoo!  The prize is $100, for the best one.  I don’t know how the judging takes place, read my Purple Haiku here if you want to.

Haiku is a form of Japanese narrative poem which consists of 17 moras, often confused with syllables, most often seen in 3 lines.  Moras have more to do with the stresses of sounds based on Japanese enunciation.  They sometimes share a similar measure to syllables in Western languages and this is most likely how the Haiku 5 7 5 American version came to be. 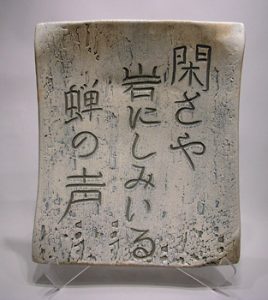 Although technically in practice for many hundreds of years, the term haiku did not actually become haiku until the very later 1800’s. Masaoka Shiki is credited with formally coining the phrase haiku during the 1890’s as a way to standardize presentation of this literary art-form.  Prior to this haiku was “hokku” or translated “starting verse” and was meant to be the start of haika or much longer chain of verses.  Because the hokku was such an important part of the presentation, many poets created unfinished works featuring simply an introduction.  Shiki standardized haiku as a way to have a complete and independent poem.

Traditional Japanese haiku is somewhat formal and usually features an emphasis on nature, whereas other place’s interpretations are more free-form.  Haiku is a beautiful form of poetry with a rich history.  Here are some examples.  Basho haiko refers to Basho Matsuo who wrote the following in the 1600’s:

A frog jumps into the pond,

And one more from Natsume Sōseki, the revered Japanese novelist and writer:

with no leaves to blow.