The Warrior’s Way from director and writer Sngmoo Lee receives a wide release this weekend. It stars an excellent Korean actor by the name of Jang Dong-gun, probably best known state-side for the Korean war epic film Taegukgi: The Brotherhood of War. This is an English-language film and the supporting cast features Kate Bosworth, Geoffrey Rush, Danny Huston and Tony Cox from Bad Santa.

Now, before we briefly discuss the plot and specifics of the movie, you have to know that is is anime-inspired, ninja/ronin western.  And, as-is appropriate with the mashing of those genres, this is an over-the-top fun film that experiments a lot, particularly with the visuals.  Perhaps drawing from that same anime-style feeling of the action there are dramatic shifts in cinematography, from weather to backdrops and beyond.

The story itself isn’t anything particularly unique, but the visuals, setting are something not seen in western (Hollywood) films.  This filmy is strong meeting of eastern and western styles of film-making.  A mix of eastern-style outlandish fight scenes with equally outlandish western explosions and drama.

Dong-gun is Yang the best of his clan, the Sad Flutes.  The film opens with him becoming the baddest swordsman alive and destroying the remnants of a rival clan with only the the baby daughter remaining.  He is required to kill this child as well.  Yang becomes the hunting after a simple smile and laugh from the baby girl stay his hand.  He escapes to some other land to find his old friend in the old west town of Lode.

Lode is full of misfit circus performers, freak-show acts and a dilapidated, 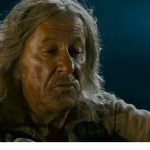 unfinished ferris wheel.  It is also home to the cute Lynne played by Bosworth.  The reason for the town being in such disrepair and the compulsive urges of Lynne to learn to fight and use knives is due to the evil Colonel, played by Danny Huston, and his extensive gang that torment the town and murdered Lynne’s parents and young sibling.

In the end the town and Lynne, being protected by Yang see an all-out battle between two armies, one of The Colonel’s old-west baddies and the other the droves of the Sad Flute assassins.  Both armies are after Yang by this time. Ninja blades, old-timey gatling guns and six shooters are a fun to see separately and glorious when in action against each other.

The visuals are too experimental at times, the pacing has issues in some parts and as I mentioned this isn’t really a new story for either the east or west.  Somehow though, it all come together to form a movie that I really enjoyed.  The weakest moments probably come from the aforementioned pacing and some of the dialog and acting from Bosworth, but again on the whole it was a fun film with some great visuals. The film could have probably also benefited from a little more from the Geoffrey Rush sniper/comic relief character. Check out the trailer: