BBC’s Sherlock Season 2 (Series 2) begins right where Season 1 ended. Sherlock faces off with soon-to-be nemesis Moriarty, a gang of unseen gunmen and a jacket filled with explosives.  The situation is strangely defused with a phone call to Moriarty, who withdraws shortly thereafter.

Andrew Scotts’s  Moriarty remains quite mysterious and the lengths and depths to which he fits in with Sherlock’s world remain undiscovered.  In many ways he is a mirror of Sherlock. He appears to do what he does not for any sort of obvious material gains at this point, but for the superiority of controlling and being smarter than ones “opponent”.

After the credits roll we’re treated to a montage of perspective clients which have no apparent connection.  These clients and past ones are amusingly chronicled by Watson’s blog on Holmes which makes the titular hero something of a media and internet sensation. “Nobody’s reading your website”, Watson says to Holmes. Holmes seems to have no interest in these cases until he is forced to as men in suits arrive and escort both Holmes and Sherlock (from different locations) to Buckingham Palace of all places. We find that brother Mycroft is representing a member of the royal family in a case that calls for Sherlock’s expertise, which he almost refuses to give while dressed in merely a blanket.

It seems there are “incriminating photos” as is always the case with political scandal, which lead back to a dominatrix by the name of Irene Adler. Sherlock quickly sniffs out her location but is met with a difficult challenge. Adler strips herself, quite literally, of any items which Holmes may use for deduction, leaving him befuddled by her beauty and lack of any clues for him to pick up on. It is clear they have a somewhat equal footing in the intellect department. The plot rapidly thickens with CIA Agents arriving at the dominatrix’s apartment looking for her hidden information. Holmes finds a hidden safe, 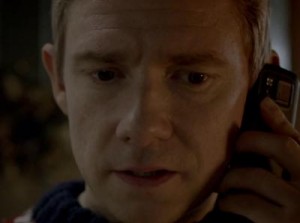 springing a trap and allowing for their escape. Adler quickly turns on Holmes and makes an escape of her own later, leaving Sherlock unconscious.

Months pass in the storyline (apparently 6) and we find Holmes, Lestrad, Watson and company at Christmas-time.  Holmes’ complete detachment from feelings and reality become quite apparent as he belittles poor lab-rat Molly and the object of her affection, which is, though obvious to us, not clear to Holmes; she has feelings for Sherlock.  Realizing his error, he has a genuine human moment and apologizes. A text received leads him to a hidden phone and the body of a dead Adler, uncharacteristically devestating Holmes.

A secret meeting reveals to Watson and then in-turn Sherlock that Adler has faked her death to hide from agencies out to get her: the British, Americans and a terrorist group. Adler later shows up at 221B after a re-appearance of the CIA whom Holmes dispatches quite easily. As Adler works with Holmes we come to understand she is working in her own best interest and with Moriarty only.  Having seemingly beaten Sherlock as the full depth of the political situation are revealed, Sherlock overcomes his feelings, of all things, to finally solve the case, returning to logic while gaining humanity at the same time.

Watson and Mycroft learn later, that sadly, the terrorists have caught up with and executed Irene… but that’s certainly not the end.

Irene Adler played by Lara Pulver is strongly seductive and intriguing, and it’s all in the eyes. As a third party its not hard to believe her at first. Yet when we stop, though privy to more information than Holmes, it’s still somehow jarring that he doesn’t figure out that he’s being played.  And full credit goes to the actors and the story; his lack of self-awareness is due to the fact that, in part, there are genuine feelings underneath all this cleverness and subterfuge.  Holmes is vulnerable to a beautiful and intelligent lady, or at least, he was. Making mistakes of this magnitude are not repeatable patterns for Sherlock.

The end segment was surprisingly touching though a bit out of the realm of this reality. Sherlock Holmes as an action star should be left to the big screen.  It does cement the ever-growing humanity in Cumberbatch’s Holmes; but stepping away from my enjoyment of this first episode, it felt out of place. Overall this is still a really strong entry into this incarnation of Sherlock Holmes’ story.

A Scandal in Belgravia is a play on the Sherlock Holmes story A Scandal in Bohemia which similarly has Holmes investigating a scandal of royal proportions involving Irene Adler, who in the original is an American Opera singer. Belgravia is a district of modern day Central London. BBC’s Sherlock returns next Sunday with their modern take on many peoples favorite Sherlock Holmes story, The Hounds of the Baskervilles.