We’ll get to the software and such later.  What everyone wants to talk about and possibly at least part of what they were expecting came to pass during Nintendo’s morning press conference.  Nintendo announced their new controller… I mean new system.  The Wii U.  I joke about the controller because thats what all the focus was.  We only caught a short glimpse of the console itself and it appears to be not much larger than a portable hard 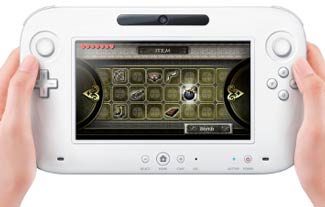 drive, yet will pack an impressive set of features (which will need to be verified when actual specs are released.

Here’s the big things about the machine for Nintendo aside from the controller (more on that in a moment). This is a 1080p machine and will feature big-name third-party support at launch. The machine is backwards compatible with the Wii Software and Hardware, meaning all your games and peripherals are usable on the Wii U.

The presentation focused on the Wii U controller which is more like a Wii Tablet that also has controller functionality.  It features a 6.2 inch HD screen.  The first feature they showed off was the ability to continue the game from the big screen onto the small screen.  No need for the TV here. The pad’s screen can also be used as a second screen to help the game; picture maps, inventory, designed plays on the small screen while graphics fill up your TV screen. It is also touch enabled and comes with a stylus.

There are two analog controls, a d-pad, ABXY buttons, and 4 triggers or bumpers in L/R and ZL/ZR options. Its got gyroscopic controllers, accelerometer, a camera, a mic, two speakers for stereo and a sensor strip, plus power and home buttons.  The controller is also rechargeable.

New specs just release state that memory is internal flash, expanded by SD cards (should have use a harddrive) but can be expanded by External USB drives (There are 4 USB slots and hopefully these will not require special formatting).  The system is drive by an IBM mult-core processor unspecified at this time.  Along with your full 1080p you have Six-channel audio output. What is the disc format you ask?  Who knows for sure, it’s listed as a proprietary high-density optical disc; same dimensions as Wii discs. Hopefully it can handle a large amount of data as PS3 trumps both other companies with sizable Bluray storage.

Game confirmed for the system are:

Some of these Wii U games will already be seeing releases on the other consoles long before Nintendo’s new machine will even be out, so that does put a damper on them.  Still it reaffirms that games developed for this system will reach the “hardcore” gaming segment and that is a good thing for the industry and Nintendo.  Say what you will, but they do dance to their own beat, what they term as “innovation”.  Sometimes true sometimes not.

Ocarina of Time for the 3Ds with upgrade visuals, 4 Swords for free with 4 player co-op on the DSI and the Wii gets Skyward Sword this coming holiday season.  There were also glimpses of an HD demo for the Wii U that looks impressive.

The orchestra will be going on tour to perform Legend of Zelda 25th Anniversary concerts across the world, with a subsequent CD release.  Sounds like a lot of fun.  Game music is huge passion of mine and I think if it comes anywhere near here, I’m going.

Delving in to 3DS

Most of the press conference prior to the Wii U announcement was focused on the 3Ds and the new download service from Nintendo. Mario 3D, Kid Icarus, Luigi’s Mansion 2, Star Fox 3D and Mario Kart will all be out on the 3Ds by years end.  They really know how to hit their core market.  Video montages were shown for 3rd-party 3Ds support, where the following were seen: Resident Evil Mercenaries, Mario and Sonic Olympic Games 2012, Ace Combat, Tetris, Cave Story, Resident Evil Revelations, Driver Renegade, Pacman & Galaga, Tekken 3D and Metal Gear Solid Snake Eater 3D.

That’s quite a line-up for the 3Ds. I have yet to experience one myself apart from a couple minutes with a broken one at a game store.  Hell, I haven’t even hit the Xl or Si. I’m still rocking the original fat DS given to me freely by a friend. I don’t have as much time for everything as I would like and handheld gaming has been the segment to suffer the most.